Information from a Falls Church, Virginia, man led to a lawsuit from the ACLU against federal and local agencies over the use of 'excessive force' in the June 1 clearing of Lafayette Square being amended to include D.C. police.
Listen now to WTOP News WTOP.com | Alexa | Google Home | WTOP App | 103.5 FM

A Falls Church, Virginia, man and his daughter say D.C.’s police were involved in the June 1 chemical-aided clearing of protesters Lafayette Square ahead of President Donald Trump’s visit to St. John’s Episcopal Church.

The allegation is part of an amended lawsuit against the president, U.S. Attorney General William Barr and other White House officials filed by groups including the ACLU.

More than once, including on June 2, D.C. Police Chief Peter Newsham denied his officers were involved in supporting the action against protesters ahead of Trump’s walk through the square.

In a news release posted on July 8, the ACLU said information provided by Dustin Foley, and his daughter, was being added to the lawsuit.

Foley can be seen in a video compiled by a filmmaker who was recording the early days of the protests in D.C. prompted by the late May killing of Minneapolis man George Floyd.

Foley, according to the ACLU, can be seen trying to take shelter with his daughter away from the square, one block to the west on H Street NW near the intersection with 17th Street NW.

That’s when the pair are confronted by a line of officers in riot gear.

What the video shows, however, is a phalanx of officers in dark clothing with “POLICE” printed on their shields, it is not obvious which agency the officers represent.

WTOP’s reporting from the night of June 1 notes that D.C.’s Metropolitan Police was in the area of Lafayette Square to round up protesters who were on the streets after the District’s 7 p.m. curfew.

Local police also were involved in a standoff with a group of protesters in the neighborhood around Swann Street NW close to 16th Street NW throughout the night.

The protesters took shelter inside local homes to avoid being arrested for violating the curfew that night.

In the aftermath of the June 1 events, a number of agencies, including the U.S. Park Police and Secret Service denied using tear gas to push protesters out of the square.

After multiple reports from news organizations whose reporters were in the square during the protests, both the Park Police and the Secret Service admitted their officers had used chemical agents, such as pepper spray and pepper balls, along with smoke canisters, to clear the square.

At one point, a Park Police spokesman agreed there was only a small difference between pepper spray, which is derived from natural ingredients extracted from hot peppers and tear gas, which is a chemical.

D.C.’s police, however, maintained their disconnection from the events around the square just before the 7 p.m. curfew.

“Yesterday began with two separate groups at approximately 3 o’clock, one in Lafayette Square and the other in the vicinity of the U.S. Capitol. Both groups assembled peacefully at these locations,” Newsham said in a June 2 news conference.

“At around 6:30, the group at Lafayette Plaza was alerted by federal law enforcement officers, who gave warnings for them to disperse. I had received before that, just before that, that there would be a presidential movement in the area. The Metropolitan Police Department did not participate in that movement.”

The lawsuit identifies MPD officers as the group that launched pellets of some sort at Foley at his daughter. It is not clear from the video if the officers were shooting “tear gas” or “pepper balls.”

The lawsuit includes a play-by-play of what happened that evening, photos of tear gas canisters collected around the square and alleges that officers used “excessive force” to clear the square of protesters.

Foley said he and his daughter came to D.C. to pass out water and sandwiches to the protesters that afternoon.

After the addition to the lawsuit was promoted on July 8, Newsham and the D.C. Police once again denied their involvement in clearing protesters from the area on June 1.

“The Metropolitan Police Department was not involved in the unscheduled movement of the President from Lafayette Square to St. John’s church on June 1, 2020,” the agency said in a statement sent to DCist.

Some clarity a day after reports of tear gas in Lafayette Square, but questions remain 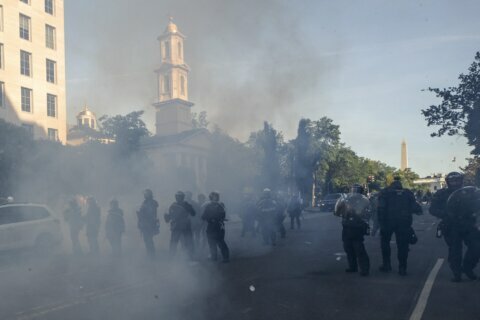