The D.C. Council unanimously approved its Fiscal Year 2021 budget after months of adjustments to the bottom line, as the pandemic reduced the city’s revenue by $770 million.

Among the budget’s highlights: A controversial advertising tax was dropped, schools are fully funded, and council members redirected funds away from D.C. police to violence interruption programs.

All 13 councilmembers voted to approve the $8.5 billion budget that hit a few snags along the way — including what council member Trayon White called a “debacle” — when unintended consequences were discovered in an advertising tax proposed by Chairman Phil Mendelson, which had already passed on first vote.

The chairman found $18 million to trim from other sources, including mental health services and capital projects, to make up what the tax would have collected.

I look forward to supporting this proposal. It’s imperative that we continue to provide services to District residents without raising taxes. We cannot tax our way out of this economically challenging time. This proposal is responsible, and responsive. #NoNewTaxes https://t.co/TlY6si9v7c

“There are a lot of ways that this budget is investing in making our city safer,” said Council member Charles Allen, who praised his colleagues for funding violence prevention, community and mental health programs by rerouting funds from D.C. police.

The council decided to reduce the increase the police department would receive by $9.6 million of the expected $18 million the mayor allocated.

It’s a move that police Chief Peter Newsham told WTOP will mean a smaller police force, and therefore the city would be less safe.

Council member Kenyan McDuffie’s REACH Act was funded, which he commended as a significant step toward approaching policy with a racial equity lens.

“I’ve also been a part of nine budgets … this is the most challenging one and it has increased every single year. What hasn’t really happened is those deep and persistent gaps between Black and white residents haven’t really closed, and it still exists across every indicator of success … Ultimately, I think we’ve got to measure this city’s ability to be a world-class city, with how we’re able to close those gaps. I think the REACH Act and putting those measures in place will help to get us there,” McDuffie said.

Mayor Muriel Bowser’s priorities in reaching affordable housing and education goals were met, as well as funding for $50 million in repairs to public housing, programs for residents returning to their communities from prison and support for immigrants who are living in the country illegally.

I worked to include study on DC agencies’ hiring & employment practices related to transgender & non-binary employees. My goal is to improve workplace culture&reduce hiring&wage discrimination.Thx @CM_Silverman @charlesallen @cmdgrosso for helping to make this a reality. (5/5)

In her proposed budget, the mayor said she did not want to raise taxes, yet the council added $60 million in taxes to fund spending on what it considers essential programs, including violence prevention, and $5 million in subsidies to ensure child care centers can remain open through the pandemic.

The council will take a final vote on the Budget Support Act next week, which is essentially the laws that accompany the budget.

DC ‘on track’ to get rent money out 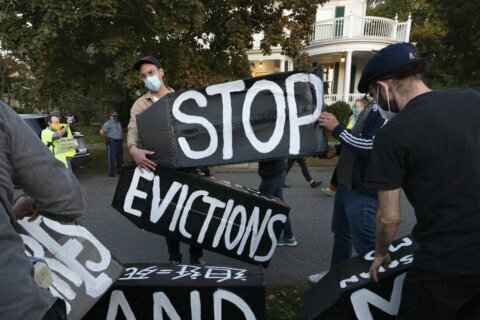 EXPLAINER: What will the end of the eviction ban mean in DC?