When the United States celebrates its 244th birthday on Saturday, July 4, look for U.S. military aircraft to grace the skies of D.C. and Baltimore.

Flyovers are planned to begin in Boston, followed by New York City and Philadelphia, as part of “an aerial salute” to places that played important roles in the American Revolution, according to a Pentagon statement.

Those aircraft will then pass Baltimore before joining other Department of Defense and heritage aircraft in an event similar to an air show that is part of the “Salute to America” event in D.C.

The air display is one element of the Independence Day festivities being held on the White House South Lawn and the Ellipse, before fireworks over the National Mall.

President Donald Trump in April said that because of the coronavirus, the event would likely have to be smaller than last year’s “Salute to America” event on the National Mall.

Metro will offer expanded service on the Fourth of July to accommodate the planned fireworks display.

But D.C. Mayor Muriel Bowser urged residents and visitors to the District to stay home this Independence Day during the ongoing coronavirus pandemic.

Due to the ongoing pandemic, this year’s “A Capitol Fourth” is changing format from its usual venue on the U.S. Capitol’s West Lawn to a pretaped, 90-minute special which PBS will air starting 8 p.m. on the Fourth of July.

Trump’s 2019 Fourth of July celebration cost taxpayers more than $13 million, twice as much as previous galas, the Government Accountability Office said on Thursday. 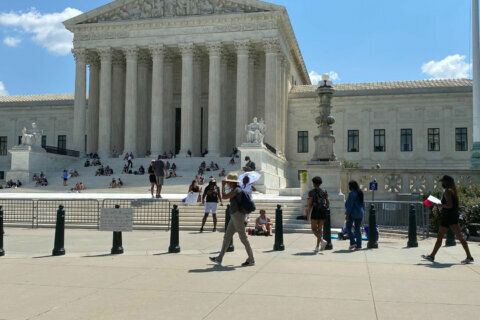