D.C. police are now investigating a homicide along with a string of fires set early on May 13.
Listen now to WTOP News WTOP.com | Alexa | Google Home | WTOP App | 103.5 FM

Arson investigators were already working to determine the source of a string of four fires discovered on the morning of May 13 in Northeast D.C., one of which sent a homeless man to the hospital.

But now, after D.C. police said the man who was seriously burned in one of the fires died Friday, D.C.’s homicide branch is involved as well.

Police identified 62-year-old Darryl Finney as the victim. He was badly burned by the fire set on the 900 block of H Street NE.

D.C. police released images of a suspect, which can be viewed on their website.

Arson investigators determined the fire that burned Finney was intentionally set, and homicide detectives are asking for help from the community.

A reward of up to $25,000 is available for anyone who provides information that leads to an arrest. If you think you know something about what happened on May 13, police want you to call them at 202-727-9009.

The location of the fires can be seen in the map below. 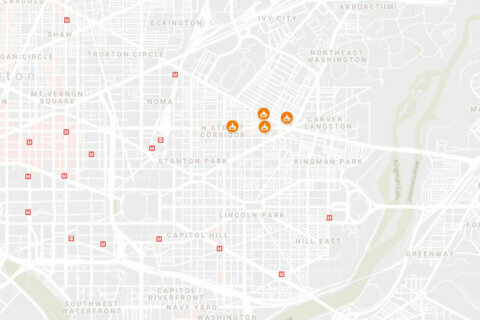