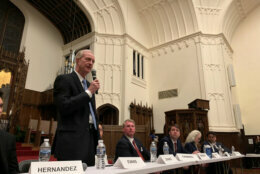 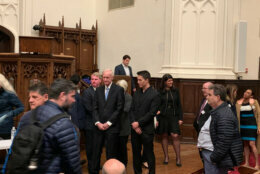 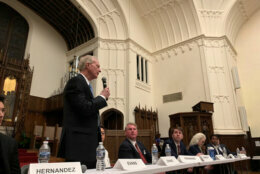 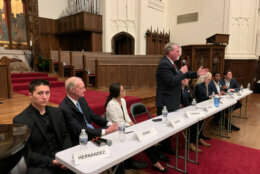 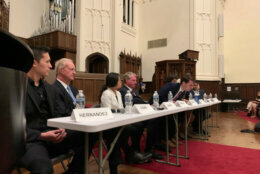 Former D.C. Ward 2 Council member Jack Evans made his first public appearance since resigning from the seat he now seeks to reclaim on Thursday during a candidates forum near Dupont Circle.

Evans stepped down amid accusations of ethics violations during his time on the council and during a federal ethics investigation, which is still ongoing.

In his opening comments, Evans began with an apology.

The former longtime city lawmaker said he also knows he has disappointed many people.

At the forum, held at Foundry United Methodist Church in Ward 2, the crowd appeared to have mixed reactions about Evans as he spoke throughout the event.

When the eight candidates seeking the council seat were asked to raise their hands if they support a ban on outside jobs for council members, for example, some in the crowd laughed and others booed as Evans’ hand went up alongside those of several other candidates.

Another raucous moment occurred when the candidates were asked if they would support the council voting to expel Evans if he were to be reelected. Some audience members cheered, and others clapped.

Many of Evan’s challengers didn’t hesitate to criticize the former council member.

“Instead of serving us, he was using his public office to serve himself,” Grossman said of Evans.

“Jack, I’ll ask you the same question that I did a month ago,” Kennedy said. “I just don’t know why you’re doing this.”

Evans admitted to the crowd that in starting a consulting company three years ago, he failed to establish methods to identify potential conflicts of interest.

“Something I should have known but didn’t and I apologize, but we are a forgiving city,” Evans said. “At least we were.”

In running for the seat, it appears Evans will not have the support of any of his former colleagues on the council. Several current council members said he resigned before they could formally expel him from the council.

In January, all the board members crafted a letter in which they said they do not and cannot support his decision to run for the seat he vacated.

The special election for the Ward 2 council seat will take place June 2. 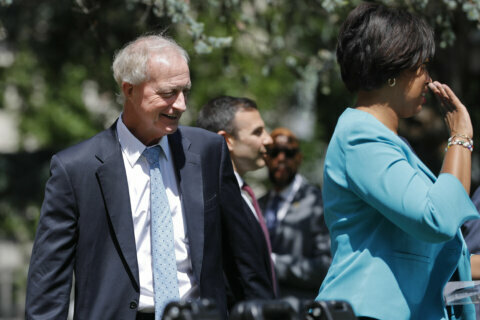