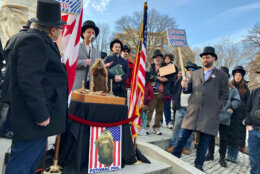 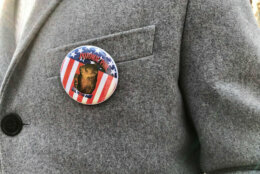 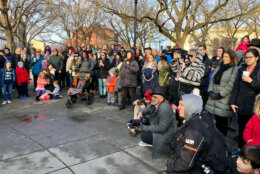 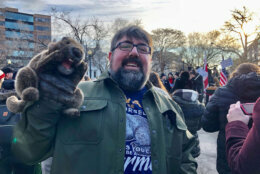 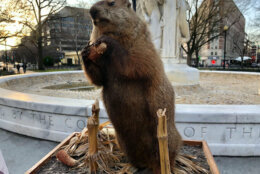 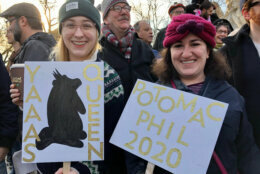 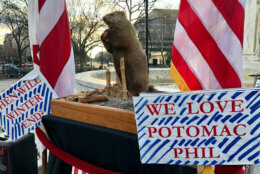 He may not move, but he still has a say on weather and politics.

Punxsutawney Phil came out of hibernation and said spring is coming early this year. However, Potomac Phil, who is eternally hibernating — yes, he’s a taxidermy groundhog — predicted six more weeks of winter and six more months of political gridlock.

“This is celebrated all across the country in different cities with different animals and we looked around nine years ago and we found a void in the groundhog community and we decided to go ahead with this festival,” said Aaron DeNu, the Dupont Festival founder and organizer behind Groundhog Day.

Kate Meroski and her friend Samantha Dercher created signs decorated with a silhouette of Potomac Phil wearing a crown as they watched the festivities.
“We live in the neighborhood and I had stumbled upon this three or four years ago on my way to work, and it was just so silly and fun that I’ve made it a point to come back every year now,” Meroski said.
Dercher said the event really brings Dupont Circle together.
“We came last year when it was zero degrees and there was snow on the ground and there were maybe 20 people here total, and we had so much fun with the silliness and the joy and the community feeling that we decided we are going to have to make this a yearly tradition,” Dercher said.
When it comes to the contradicting predictions, Meroski said it’ll be interesting to see which marmot is right.
“We’ll have to see the battle of the groundhogs and who is correct,” Meroski said.