A woman who nearly died at a Metro station was reunited with the people who helped save her life during a ceremony hosted by D.C.'s fire department on Saturday.
Listen now to WTOP News WTOP.com | Alexa | Google Home | WTOP App | 103.5 FM

A woman who nearly died at a Metro station was reunited with the people who helped save her life during a ceremony hosted by D.C.’s fire department on Saturday.

Arielle Baker, 29, has heart problems and went into cardiac arrest at the Columbia Heights Metro stop in early January.

She was saved by two bystanders who knew how to perform CPR.

“I’m so thankful for everyone who took it seriously and gave me another chance at life,” Baker said during the ceremony. “Had these women not been there for me, I wouldn’t be here. I don’t take that lightly.”

One of the bystanders, Kimberly Herrmann, is a doctor at Whitman-Walker Health in the District.

“It was unbelievable,” said Herrmann. “It was like it was in slow motion.”

Others credited with saving Baker’s life include Metro Transit Police officers who shocked her with a defibrillator and a D.C. Fire and EMS crew that got her to the hospital.

“This is just a true testament to the goodwill of people,” Baker said.

In all, the fire department honored 15 people who helped Baker that day.

They received medallions known as “Cardiac Arrest Save Coins,” which D.C. Fire and EMS award to lifesavers who help return a pulse to a pulseless patient before that patient is taken to a hospital.

The case becomes coin eligible when the patient is discharged from the hospital in good health.

“This is a celebration of life,” said Battalion Fire Chief Brian Alston. “Everything that could be done was done in an effort to bring the patient back to life.”

At one point Baker became choked up and wiped away tears as she said she would “never forget” those who helped her.

“I’m only 29-years-old and I have so much more that I want to do and I’m so thankful for everyone who gave up some of their time in order to save my life.” 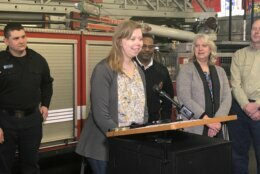 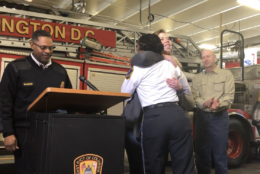 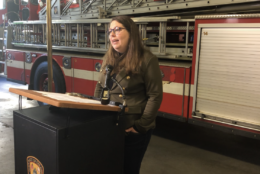 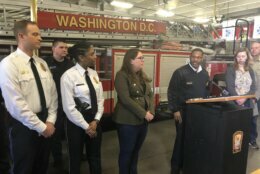 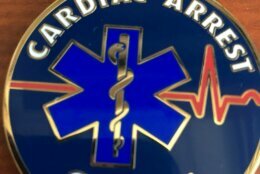