For the first time since 1993, the full U.S. House of Representatives could hold a vote on D.C. statehood.

For the first time since 1993, the full U.S. House of Representatives could hold a vote on D.C. statehood.

The news comes with the announcement of the markup and expected Feb. 11 vote on HB 51 in the House Committee on Oversight and Reform.

“This is a historic moment,” said D.C. Del. Eleanor Holmes Norton, the District’s non-voting representative on Capitol Hill, in announcing the expected markup of the bill.

Norton said she is not only confident the legislation will make it out of committee, but also believes it will receive support in the Democrat-controlled House for it to pass a full vote. The 1993 legislation was defeated in a full House vote.

“I believe, and I hope, that this year will be different,” said committee chair Rep. Carolyn Maloney, a Democrat representing New York. “We will pass it in the House of Representatives.”

The battle for statehood started when the District of Columbia came to be more than 219 years ago, Norton said.

“(The legislation’s goal is) to give the residents of the District of Columbia equal representation with the states in both houses of Congress and to ensure that Congress can never again interfere into the governing affairs of the District or dictate or change the District’s local laws,” Norton said.

The legislation is expected to meet some resistance in the House.

The Republican lawmakers called for transcribed interviews from witnesses in the ethics probe Metro conducted into Evans, who once led the transit agency’s board.

Meadows and Jordan said they also want to hear from Evans himself, and they requested that he testify at the last hearing regarding the D.C. statehood bill.

During the announcement Thursday, Maloney pushed back, saying that Evans and other Republicans were invited to the September hearing, but Evans chose not to show.

“It’s not my responsibility to get all of their witnesses,” Maloney said. “When I want a witness at a hearing, I work to get the witness there.”

Meadows and Jordan said in their letter that they disagreed with Maloney on that point.

On Thursday, D.C. Council Chairman Phil Mendelson called the expected markup of the bill an important milestone and said the Evans situation should not hold up the process of D.C. potentially becoming a state.

“If inappropriate behavior by an elected official was the litmus test for whether a jurisdiction could have statehood, there would be no states in this union,” Mendelson said.

If the bill does pass the U.S. House, it would then have to make it through the U.S. Senate, which is under Republican control.

Norton said she is already working with some senators with the expectation that it reaches the Senate.

If it were to become law, the bill would make D.C. the 51st state, known as the state of Washington, Douglass Commonwealth.

The name would be dedicated, in part, to abolitionist Frederick Douglass. 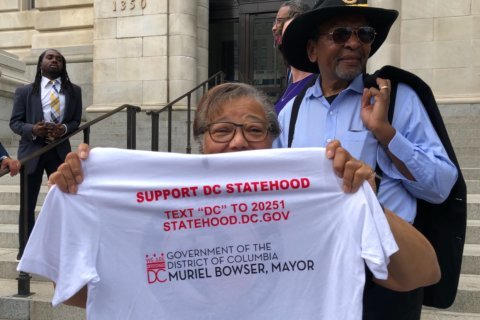