A mother and her baby were reunited on Christmas Eve with the D.C. firefighters who helped in a life-saving delivery earlier this year. See photos.
Listen now to WTOP News WTOP.com | Alexa | Google Home | WTOP App | 103.5 FM

Almost as soon as she walked into the Southeast D.C. firehouse that’s home to Engine Company 19 on Christmas Eve, a mother found herself wiping away tears of gratitude.

Back in March, Cierra Duckett was in a car on Minnesota Avenue Southeast: She was going into labor, but was less than 30 weeks along. She was in pain, and the baby wasn’t waiting. Her husband flagged down passing firefighters.

“We were on our way to another call,” Hooks said. But it was obvious Duckett needed their help.

The experienced medic said Duckett suddenly shrieked that the baby was coming. “We looked, and the baby was right there,” Hooks said.

But baby ZaNiyah Peterson was delivered still inside the amniotic sack — Hooks had to cut the infant from the sack, and found the baby wasn’t breathing.

Duckett said it was scary. She could overhear the first responders working on her baby.

“They kept saying she wasn’t looking too good,” Duckett said. “But we had hope and we had faith — and she’s a fighter. She really fought for her life.”

On Tuesday, nine months later, Duckett visited the firehouse to thank the team that saved her baby. She stood at a podium and handed out awards to Hooks, and firefighters Shamia Pardlow, Jamil Blackman, Monique Smith and Capt. Tyrone Jenkins.

Pardlow had only been on the job two days when the team was called to help Duckett and her baby. She recalled how tiny ZaNiyah was.

“She fit in the palm of my hands,” Pardlow said. “And I have small hands!”

To see how ZaNiyah is now thriving, Pardlow said, “I’m just so happy. She’s my Christmas gift, too!”

Duckett said she knows that ZaNiyah’s too young to understand now, but she often tells her baby the story of her birth. “Just to let her know that she was a miracle — she was saved.” 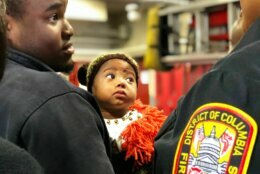 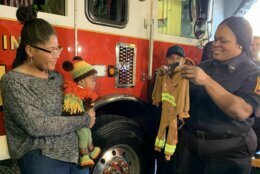 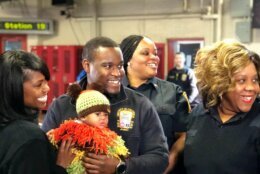 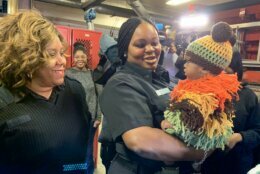 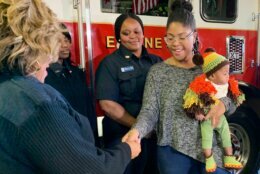 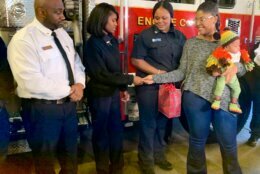