‘Nothing else matters’: Climate protesters cause traffic headache in DC 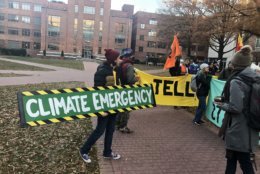 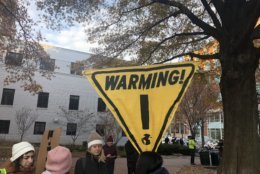 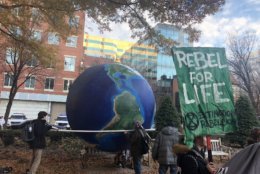 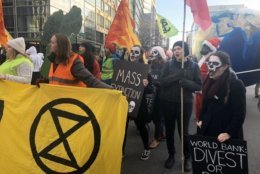 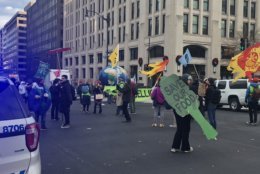 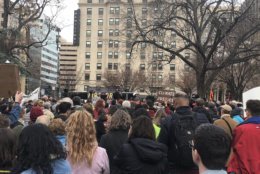 As part of national and global demonstrations meant to call attention to climate change, protesters blocked traffic in D.C. early Friday morning at the height of rush hour.

“We’re going to be hopefully stopping some people from getting to work and inconveniencing them and getting people out of the rhythm of the normal workday,” protester Tess Goddard told WTOP.

“This might be an inconvenience … but the climate crisis is going to actually change our lives fundamentally. If we don’t solve the climate issue, literally nothing else matters.”

A few dozen protesters, many of them college students, gathered at George Washington University at 7:30 a.m. and marched to the World Bank headquarters along Pennsylvania Avenue in Northwest between 17th and 19th streets.

The demonstrators made their way along H Street and Pennsylvania Avenues and disrupted traffic along K street, demanding that the World Bank fully divest from fossil fuels.

“Their money is directly contributing to the death of our world,” Bryce Maples, a protester, told WTOP.

At one point, protesters were physically removed from the streets.

“Not only do the leaders of the major financial institutions know that they are contributing to the biggest existential crisis of our lifetime; they are preparing for it,” said organizer Raegan Davis.

“We know we can stop climate chaos and if financial institutions would rather profit than help us, then we will shut them down until they change their minds.”

They then marched to the nearby Wells Fargo bank at 13th and I streets, blocking the bank’s front doors by chaining themselves together. Police put up yellow tape to cordon them off.

Shut Down D.C. is the same group that held similar protests this year, including in September during which 32 people were arrested for blocking traffic.

Fridays have been tied to climate change protests around the world since the 16-year-old Swedish climate change activist Greta Thunberg began “striking” from school on Fridays to demand action.

That led to a movement called “Fridays for Future,” which urges people to strike from school or work on Fridays to demand action on climate change.