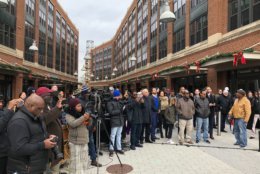 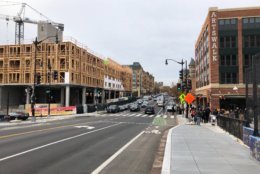 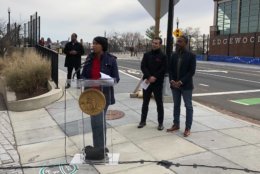 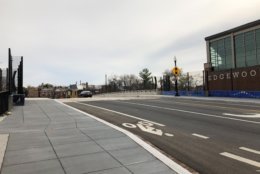 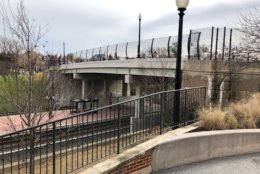 “We invested $12.7 million in replacing an 87-year-old bridge,” she said. “Regardless of whether we’re driving, biking, scooting, walking, we need our roads to be safe.”

The bridge crosses Metro and CSX tracks near the Brookland/Catholic University Metro station and links the Edgewood neighborhood with the growing number of restaurants and shops on Monroe Street at the edge of the Catholic University campus.

“It’s looking great. A finished bridge is much better than an under-construction bridge. It really helps connect communities, both as a tangible bridge and a metaphorical bridge between Edgewood and Brookland,” said Nick Cheolas, the neighborhood’s Advisory Neighborhood Commissioner.

The construction on Monroe Street, between 7th and 10th Streets, began in August 2017. The work included a new bridge superstructure and substructure and new approaches and high concave-shaped steel railings. Overhead power lines have been relocated underground and there’s improved landscaping.

The bridge is also an important link for the Metropolitan Branch Trail — an 8-mile rail trail, that when completed, will run from Silver Spring to Union Station. The trail is popular with bicyclists.

Katie Harris, a member of the Washington Area Bicyclists Association, said she appreciated the investment in the bridge, but there could have been more done to separate cars and cyclists.

“The bridge is a really great investment, but the bike lanes are just painted, they aren’t protected with any infrastructure like flex posts,” Harris said. “People feel much safer and are more safe when there is protection between the cars and the people who are biking.”

Jeff Marootian is the director of the District’s department of transportation. He said the flex posts should be installed by the end of 2019.

The bridge’s location can be seen in the map below: