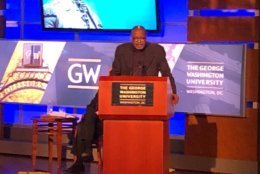 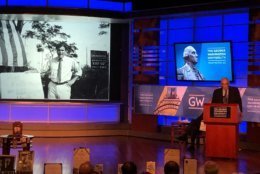 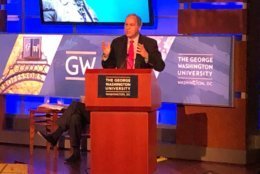 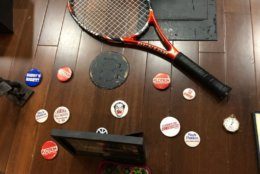 It was held at Plotkin’s request, at his alma mater: George Washington University.

D.C. Council member Jack Evans explained that about five years ago, Plotkin planned the entire celebration as the two longtime friends drank beer at the bar at Morton’s in Georgetown.

Evans wrote down the details on a napkin, which he brought with him as he emceed the event at the Jack Morton Auditorium.

“Few people could fill a room with just their personality, but Mark sure could,” LeBlanc said.

Former D.C. Mayor Sharon Pratt drew laughs from the audience when she said that people loved Plotkin, and “we also knew him.”

Pratt said that Plotkin could be “inspiring and quite irritating, uplifting and also sometimes vexing.”

But she said one could not get too upset with him because his all-consuming purpose was statehood for D.C.

“As our cherished advocate proclaimed, one day, we will be the 51st state,” Pratt said.

“The suggestion I want to make,” Gray addressed to LeBlanc, “… is that we forever memorialize Mark in the Smith Center. I want to have us put a plaque on that seat that he sat in, in perpetuity, that says ‘Dedicated to Mark Plotkin, a distinguished alumnus of (The) George Washington University’.”

Segraves explained that — despite never meeting the man — Plotkin decided to open a D.C. office dedicated to getting Sen. Edward Kennedy elected president.

“Apparently, whoever the next guest was going to be did not show up, so Plotkin ended up doing an hour with Larry King because the guy could talk forever. And that was the birth of his radio career,” said Segraves.

Segraves said he knew Plotkin for almost 20 years. For six of those years they didn’t speak to one another, including one year when they shared an office at WTOP.

After Plotkin became ill with pancreatic cancer, Segraves reached out to Plotkin and they renewed their friendship.

“I would not have my career if it weren’t for Mark Plotkin,” Segraves said. “He took me from obscurity, he got me into a place at WTOP Radio where I had no business being given a radio show, and that really sent me off on my career.”

Kojo Nnamdi of WAMU, where Plotkin worked before coming to WTOP, joked about his many feuds.

“Jack (Evans) had indicated that there was some concern as to whether there might be sufficient people here to fill the auditorium,” Nnamdi said. “Well, all he had to do was contact all of the people to whom Mark has stopped speaking over the years, and we would have been able to fill RFK Stadium.”

Len Simon from New York warmly eulogized his friend’s skills behind a microphone.

“If heaven has a radio station, a microphone, some blue felt pens and yellow legal pads, it is now a better place and a lot more fun than it has ever been before.”

Plotkin asked for five particular songs to be played at the event, including one at the end sung by the great Tony Bennett.

“The last one is so fitting for all of us. It’s called ‘I’ll Be Seeing You’,” said Evans. Then his voice filled with emotion as he waved and said, “we’ll be seeing you” as the music began.

During the celebration, an urn containing Plotkin’s ashes was on display on stage, along with some of his memorabilia.

Plotkin will eventually be laid to rest in Chicago — the place where he grew up, and where his mother is buried.