A large blaze in a three-story apartment building in Northwest D.C. has been put out, but officials are still investigating what caused it.
(1/4) 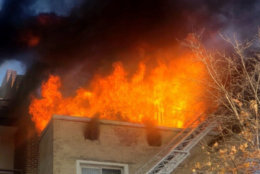 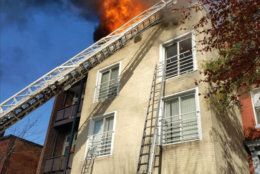 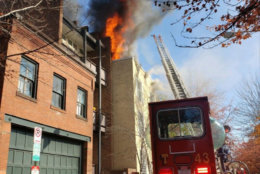 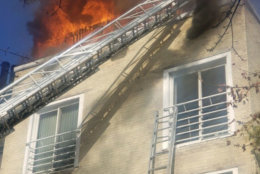 A firefighter is in the hospital after battling a fire in a three-story apartment building in Northwest D.C.

D.C. Fire and EMS responded to the large fire Saturday morning and had it under control before 11:30 a.m.

Vito Maggiolo with D.C. Fire and EMS told WTOP that the firefighter has minor injuries and is expected to be okay. No one else was injured.

The flames were so intense partly because a propane tank exploded on the roof, Maggiolo said.

About 75 firefighters were dispatched to the scene on 15th and Church streets in Northwest.

Nine people are currently displaced, according to fire officials.

Thanks for getting on the scene fast! I hope everyone is safe. pic.twitter.com/s0iUXB7IAw

The top floor and roof of the building caught fire around 10:30 a.m., according to D.C. Fire and EMS. The building was occupied at the time. One firefighter was taken to the hospital with minor injuries.

Some residents are expected to be displaced by the fire, and Red Cross assistance has been requested, D.C. Fire and EMS said.

The cause of the fire is currently listed as undetermined.

The fire caused heavy smoke to billow above downtown, with Washingtonians reporting seeing the towering plume for miles:

Fire in NW DC, looks to be at about 16th and P. Hope everyone is ok. @PoPville pic.twitter.com/Kw3rJ3Qu00