D.C. Council Member Jack Evans has filed a challenge to the effort to recall him, saying that more than one-third of the signatures on the petition are inaccurate or forged.
Listen now to WTOP News WTOP.com | Alexa | Google Home | WTOP App | 103.5 FM

D.C. Council Member Jack Evans has filed a challenge to the effort to recall him, saying that more than one-third of the signatures on the petition are inaccurate or forged.

Evans, a Democrat from Ward 2 who has faced ethics complaints for most of this year, questions about 2,200 of the 5,588 signatures on the recall petition. Recall advocates need 4,949 valid signatures to trigger a recall election early next year, so if the contested signatures are all thrown out, the effort would fail.

The petition was filed about a week and a half ago. Tom Sherwood, a contributing writer for the Washington City Paper first reported on Evans’ challenge, and the complaint has been posted on social media.

Evans’ lawyer has asked for the petition to be “struck in its entirety as inherently and irretrievably corrupted.”

The complaint says that multiple pages worth of signatures on the petitions appear to have been written in the same handwriting. It also says that some of the people whose signatures purportedly are on the petitions “are personally known” to Evans, and that they told the council member they didn’t sign them.

The D.C. Board of Elections has about 20 days to review the complaint.

The recall isn’t the only problem Evans is facing; his colleagues on the council are considering voting to remove him.

“They are meeting Tuesday to discuss what they should do,” Sherwood told WTOP. “And in two more weeks, on Dec. 17, they are to vote on, probably, to censure Jack Evans … and let the voters decide in the upcoming election, or, for the first time ever, the D.C. Council could vote to expel Evans.”

Nine of the other 12 members of the council have said publicly that Evans should resign.

Meanwhile, a federal investigation of Evans, which included a raid on his house in June, continues.

A report released earlier this month claimed Evans had committed numerous ethics violations, such as failing to disclose tens of thousands of dollars in outside income he was being paid, and failing to recuse himself from votes in actions on behalf of clients who were paying him at the time.

Evans’ lawyers responded that the accusations were “nowhere near as serious” as his critics had charged, and that the report was leaked to the media “for the purpose of forcing Mr. Evans to resign.”

It’s the latest step in the saga of Evans, who has faced complaints for most of the year that he has used his position to benefit himself.

In August, Evans was fined by the D.C. Board of Ethics and Government Accountability after the board said he used his office for personal gain.

Evans stepped down in June from the Metro board of directors, where he had been chairman, after a Metro investigation found Evans had failed to disclose contracts worth several hundred thousand dollars, even as he tried to help those companies get business with Metro.

Before the D.C. Council recessed for the summer, it disbanded its Committee on Finance and Revenue that Evans chaired to essentially strip him of the position, but it rejected a proposal to remove him from all council committees with a tied vote of 6 to 6.

The problems stemmed from a private consulting firm Evans started, and “he has now said that was a mistake and he has ended that firm,” Sherwood said.

Adam Eidinger, the chair of the Committee to Hold Jack Evans Accountable, told WTOP that the committee “collected 5,588 signatures of people who think they are registered in Ward 2 and by doing so demonstrated overwhelming support to have a recall election of Jack Evans. We will review his challenge and continue to fight for the recall which is needed to restore trust in the DC Council.”

Evans is the longest-tenured present member of the council, having first taken office after a special election in 1991. His legacy includes the building of the Capital One Arena and the Walter Washington Convention Center, as well as helping to attract the Washington Nationals.

“He has a very strong pro-business background,” Sherwood said. “The question is, did he sell any of that interest? And we will be finding out.”

Lawyers for Jack Evans say he’s being steamrolled; his colleagues dismiss it 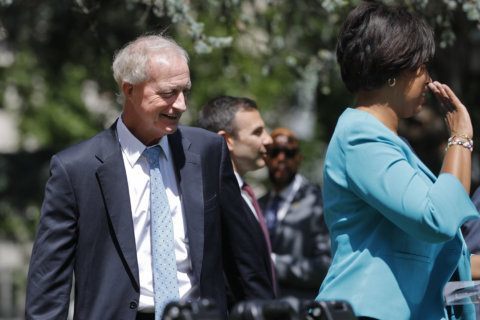