After ‘momentous’ DC statehood hearing, supporters march to unify cause

The first congressional hearing in more than 25 years on whether D.C. should become the nation’s 51st state began Thursday with supporters claiming that the proposal has more support than it has had in a generation.

D.C. Del. Eleanor Holmes Norton, a Democrat, presided over the House Committee on Oversight and Reform as its honorary chair, in the place of Rep. Elijah Cummings, D-Md., who normally presides over a panel that often deals with issues related to allegations of obstruction and President Donald Trump.

“For the first time in a generation, there is real and sustained momentum on this effort,” Norton said. “This legislation would fulfill the promise of democracy for more than 700,000 Americans who call Washington, D.C., their home.”

Norton, who as D.C.’s delegate does not have the full House voting rights that other lawmakers do, said the legislation to make the District of Columbia a state now has 220 co-sponsors.

But, as she acknowledged, none of the supporters of the bill are Republicans. The ranking Republican on the committee, Rep. Jim Jordan, R-Ohio, raised several doubts about making D.C. a state at the outset of the hearing.

“Let us not ignore the elephant in the room, ladies and gentlemen: District government currently faces serious allegations of misconduct,” he said.

Jordan referred to D.C. Council member Jack Evans, the former Metro chairman, who has been at the center of an ethics scandal. He said Republicans’ efforts to have Evans testify before the panel had been denied.

At-large D.C. Council member Robert White expected this pushback from Republicans on the committee. He, along with D.C. Council Chair Phil Mendelson and other city representatives, were front and center during the hearing.

Jordan said that Evans’ scandal was just the latest in a series of political scandals that have followed D.C. politicians, such as former Mayor Marion Barry’s FBI bust for crack cocaine almost 30 years ago.

Maryland Rep. Jamie Raskin, a Democrat, took issue with suggestions that ethics issues surrounding a D.C. council member should give lawmakers pause over allowing D.C. to become a state.

“The claim seems to be that if one person in a jurisdiction gets in trouble, you disenfranchise the entire community,” Raskin said. “That cuts against everything we believe in about democracy.”

Other issues brought up by Republicans on the committee ranged from constitutional questions to how D.C. is managed.

Lawmakers questioned why D.C. spends so much money on schools, yet is often included on lists of the lowest-performing public school systems in the country. They also touched on matters, such as crime and corruption.

D.C. Mayor Muriel Bowser, as well as Democrats on the committee, pushed back at suggestions that D.C. leaders can’t manage their own affairs.

On the issue of crime, Bowser noted that federal officials control much of the D.C. judicial system, while she oversees D.C. police.

“So the way that you and all of my residents can ask me about how we’re driving down crime, is to make sure we have complete control over the agencies that affect crime in Washington, D.C. And statehood is the way that we get there,” Bowser said.

In a weekly newsletter, Bowser encouraged D.C. residents to come to the hearing wearing the D.C. flag colors and to “come for what is due to us.”
“For 218 years, Washingtonians have lived in the nation’s capital, yet we’re not equal,” Norton said in a video informing residents about the hearing on her bill, House Resolution 51.

D.C. Attorney General Karl Racine said in a statement Thursday that “More than 702,000 District residents live in the shadow of the Capitol Building. We pay taxes, enlist in the military, and serve our country in countless ways. Yet we are denied a real say in our nation’s affairs, and the full autonomy to pass laws that reflect our values.” He added that 20 other state attorneys general support the bill.

Later following the hearing, a march took place that began from the Chinatown area to the National Mall. It was part of Moechella events organized over social media in partnership with the Million Moe March, March for our Lives DC and Long Live GoGo the Movement.

Making D.C. a state and ending gun violence in the city were the major themes of the rally. One of the march’s prominent slogan was, “Hugs Not Slugs.”

Speakers, including White, talked about how gun violence has taken the lives of many D.C. youths, and how children should not be afraid walking down their streets.

A woman named Latoya talked about surviving a gunshot to the head inflicted by her boyfriend while he was high on drugs.

The Eastern High School marching band led the march from right outside Capital One Arena along F Street, down 7th Street to Madison Drive. 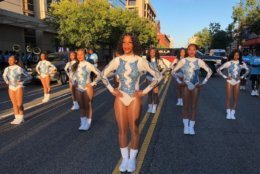 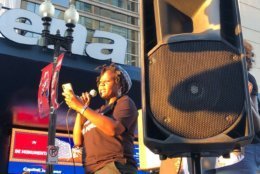 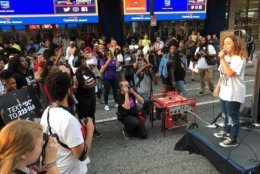 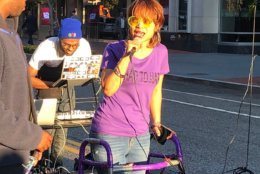 WTOP’s Michelle Basch contributed to this story from Gallery Place-Chinatown.