Coronavirus News: Fairfax Co. votes to increase substitute teacher pay | Is it time to get a COVID-19 booster? Which one? | Local cases of COVID-19 | How many in DC region are vaccinated?
Home » Washington, DC News » Violent night: 2 dead,…

One man was killed and five other people were wounded in a shooting at an apartment courtyard in D.C.'s Columbia Heights neighborhood Thursday night. It was the first of two shootings in the District that left a total of nine people shot Thursday.
Listen now to WTOP News WTOP.com | Alexa | Google Home | WTOP App | 103.5 FM
(1/3) 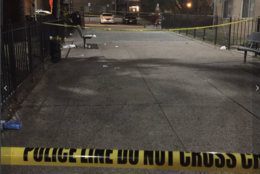 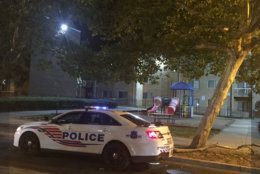 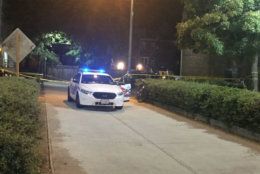 One man was killed and five other people were wounded in a shooting at an apartment courtyard in D.C.’s Columbia Heights neighborhood Thursday night.

D.C. police said the suspects in the shooting are two men armed with “AK style rifles” last seen in a light-colored Nissan sedan and said it’s possible the shooting was a drive-by.

The gunfire, about a block away from the Columbia Heights Metro station, was the first of two separate deadly shootings in the District that left a total of nine people shot Thursday.

The first shooting, according to police, was reported just after 10 p.m. at an apartment complex on Columbia Road near 13th Street.

One man died at the scene, Stuart Emerman, commander of the D.C. police department’s Third District, told reporters during a news conference Thursday night. Five others — four men and a woman — were taken to the hospital with gunshot wounds.

At least one of those wounded had “critical” injuries, Emerman said.

Responding to a reporter’s question about neighbors hearing “rapid gunfire,” the commander said investigators had recovered several shell casings from the apartment courtyard.

At the time of the commander’s news conference, police did not have a description of the suspects. But shortly afterward, D.C. police issued a lookout for the two men and said they were last seen in the rear of the apartment building.

Alert: Shooting in the 1300 block of Columbia Rd NW. Lookout is for a light colored Nissan sedan unknown tag# occupied by (2) males armed with AK style rifle, last seen in the rear of the listed location. pic.twitter.com/PY0l05TS7B

Brianne Nadeau, the D.C. Council member who represents Columbia Heights, issued a statement saying, “It is beyond time to stop the epidemic of gun violence in this country, and I will not stand by while the residents of Columbia Heights are again visited by the horrible spectre of violence.”

A message about the event this evening on the 1300 block of Columbia Road. pic.twitter.com/fGeuZNSsqV

Police were called to 1300 Brentwood Road near Rhode Island Avenue Northeast at about 10:22 p.m. for the report of shooting. Two men and a woman were taken to the hospital, and one of the men later died, D.C. police said.

Police said there is no indication the two shootings are related, but they are still investigating.