Residents of the Arthur Capper senior apartments in Southeast D.C. have filed a lawsuit after a fire destroyed the building and all their belongings.
Listen now to WTOP News WTOP.com | Alexa | Google Home | WTOP App | 103.5 FM
(1/3) 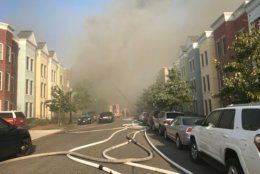 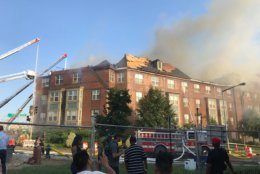 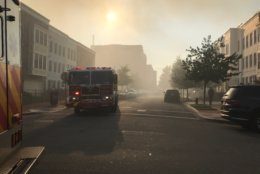 A year after a fire destroyed the homes and belongings of residents of a senior citizens apartment complex in Southeast D.C., a lawsuit has been filed on behalf of the Arthur Capper Senior Public Housing’s 150 residents.

It’s the second lawsuit sparked by the Sept. 19, 2018, fire at the four-story building which stood at the border of the Navy Yard and Capitol Hill neighborhoods in the 900 block of 5th Street.

The complaint and request for a jury trial argues that the residents, most of whom were elderly and some disabled, lost their homes and possessions including many irreplaceable sentimental items.

“My equipment … had a lot of vintage equipment … it was recording equipment … electric keyboards, I had at least eight or nine guitars, three or four … I had enough to supply a band,” said Carlton Moxley, 64, a veteran D.C. street musician who was performing outside a Metro station at the time of the fire.

“Blocks before I could get to it, I could smell the smoke … I saw the flames … smoke was thick,” Moxley said.

“Everything was in there; I only had the clothes on my back and the keyboard that I was playing,” he said.

Last month, Raymond Holton, who was trapped inside his apartment for five days after the fire, filed a $3 million dollar lawsuit.

Residents argue that building managers failed to maintain the property in proper condition and are seeking unspecified compensatory and punitive damages.

The property manager, Edgewood Management Company, and the D.C. Housing Authority along with 10 others are named in the lawsuit.

Edgewood released the following statement in response to the lawsuit:

“While we are thankful that no lives were lost in the fire and that all residents were safely evacuated with the help of our team, we fully understand that displaced residents have had a challenging year re-establishing their living situations. We are doing what we can to assist them through their transition.

That said, Edgewood strongly denies litigant claims and we will vigorously fight these baseless lawsuits.”