On a hot day, celebrating a cool achievement at the Apollo 50 Festival

Folks are braving the heat to celebrate 50 years since the first humans walked on the moon on July 20, 1969.

Tents dotted the National Mall near the Smithsonian National Air and Space Museum for the Apollo 50 Festival.

Space exploration enthusiasts found different ways to stay cool in the middle of a summer heat wave by relaxing under trees with precious shade and with cool beverages. The museum was another source of cool shelter — and celebration.

Inside one of the tents along the Mall, Christian Graybeal, a project coordinator for NASA, greeted the curious at the “NASA in Your Life” display. He spoke with WTOP during a break from giving visitors the rundown on items we take for granted that NASA helped develop. 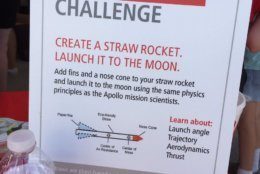 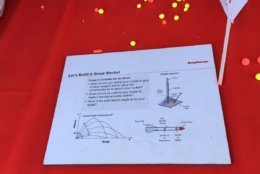 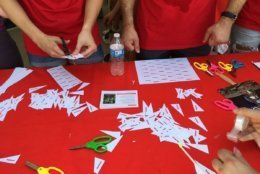 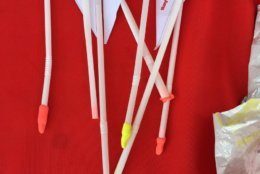 “Some of the things I think are pretty cool, are a lot of the high-efficiency water filtration systems that you see in water bottles everyday … the modern ones were developed for the ISS — the International Space Station.”

Graybeal, however, was not drinking Tang while standing near a fan to stay cool. His drink of choice, a red-orange liquid, was actually something developed by sports scientists.

“I made powdered Gatorade the night before, and I froze it, so that’s what I’ve been drinking,” he said.

Under another tent, representatives from Raytheon helped kids, and kids at heart, construct straw rockets.

Dorothy, who declined to give her last name, was watching her son Davis, 8, build a straw rocket. They’re from the Chicago suburbs and came to town specifically for the Apollo 50 event. Dorothy said Davis has loved science and space since he started watching a certain television show at 3 or 4 years old.

“He started watching the show ‘Ready, Jet, Go’ back when it first came out.” Dorothy said.

Along with taping paper fins on his rocket, Davis had another item on his to-do-list.

“I want to go to the LEGOS,” he said with a smile.

The festival along the mall ends Sunday at 8 p.m. The museum closed at 5:30 p.m. Saturday but will reopen at 8 p.m. for events that last until 2 a.m. Sunday.