In a letter to lawmakers on Capitol Hill made public Thursday, Interior Secretary David Bernhardt put estimates of the department’s share of costs for President Donald Trump’s July Fourth “Salute to America” at the Lincoln Memorial at $2.45 million.

Bernhardt called the use of public funds justified, and cited past administrations’ spending for concerts, parades and other celebrations in and around the National Mall.

The disclosure confirms what The Washington Post had previously reported: that close to $2.5 million was diverted from the National Park Service, which normally uses the money from entrance and recreation fees to make improvements to U.S. parks.

There are further concerns from local leaders as well.

In a Tuesday letter to Trump, D.C. Mayor Muriel Bowser said the president’s Fourth of July event on the National Mall, as well as protests by others, have left the city’s security fund bankrupt, and that it will be running at a deficit of more than $6 million by the end of September.

She attributed the Emergency Planning and Security Fund (EPSF) numbers to estimates by the District’s Homeland Security and Emergency Management Agency and said the total cost for the District is estimated at $1.7 million.

The EPSF covers public safety at events, anti-terror efforts and support for the Secret Service.

Security for the annual “A Capitol Fourth” concert, which was held the same day on the National Mall, was provided by the federal Capitol Police and U.S. Park Police, not D.C. police.

“These overages can be attributed to declining reserves, increased demand for heightened security, and a one-time draw down of $7.3 million to cover security costs associated with the 2017 presidential inauguration,” Bowser wrote.

The White House debates that figure.

Reached for comment about Bowser’s letter, the White House said: “We have received the letter and will respond in a timely manner.”

Senators are also seeking to probe the cost of the event, which included military flyovers and tanks on the National Mall.

A Defense Department spokesperson confirmed Wednesday that the Pentagon spent $1.2 million on the “Salute to America” celebration, which does not factor in the cost of flyovers, since the flyovers are being listed as training flights to “facilitate flying hours, which are imperative to military readiness.”

That puts known cost estimates for “Salute to America” at $5.35 million. 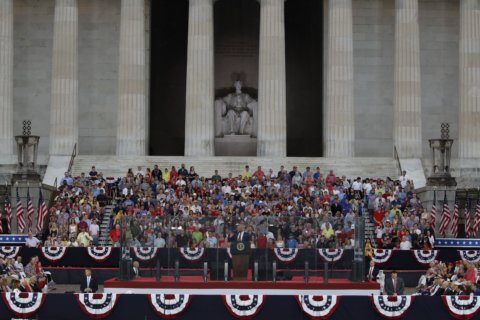