A trio of Democratic U.S. senators is requesting an investigation into the costs of President Donald Trump's "Salute to America" event on the Fourth of July, which included military flyovers and tanks on the National Mall.
Listen now to WTOP News WTOP.com | Alexa | Google Home | WTOP App | 103.5 FM

A trio of Democratic U.S. senators is requesting an investigation into the costs of President Donald Trump’s “Salute to America” event on the Fourth of July, which included military flyovers and tanks on the National Mall.

The lawmakers, who include Sen. Chris Van Hollen, D-Md., are asking the Government Accountability Office to determine whether the event broke any laws that prohibit taxpayer money from being diverted for political purposes.

“Congress did not specifically provide funds to cover the costs of the president’s expanded Fourth of July events, and we are very concerned by the impacts and the precedent of diverting limited federal resources — including the use of military personnel, equipment and aircraft, as well as other appropriations or visitor fees paid to improve national parks — to organize and execute unbudgeted events,” says the letter sent to Comptroller General Gene Dodaro with the GAO.

The letter is also signed by Sen. Tom Udall, D-NM, and Sen. Patrick Leahy, D-Vt., who, like Van Hollen, serve on the Senate Appropriations Committee.

NEW: We are formally requesting @USGAO investigate costs of @POTUS’ 4th of July event & whether it broke laws that prohibit taxpayer $ from being diverted for political purposes.
@SecBernhardt hasn’t responded to our inquiries, and the American people deserve immediate answers. pic.twitter.com/ubxTokRl4F

The letter also states the lawmakers are “troubled” by reports that the Republican National Committee was involved in providing access to some of those who attended the event.

The Washington Post reported that close to $2.5 million was diverted from National Park Service, which normally uses the money from entrance and recreation fees to make improvements to U.S. parks.

The lawmakers noted in their letter that the nation’s federal parks are facing a backlog of $12 billion in deferred maintenance costs.

The White House has said the event was nonpartisan, and Trump has downplayed its costs.

Trump announced at the White House on Monday that he plans to hold the event again next July.

Several D.C.-area lawmakers — all Democrats — raised concerns about the president’s event before it took place last week. Among them were D.C. Del. Eleanor Holmes Norton and Rep. Don Beyer, D-Va., who said the holiday should be “about U.S. independence, not Trump’s ego.”

But many of the thousands of people who gathered on the National Mall for Trump’s address and the following fireworks said they enjoyed the event and appreciated the expanded celebration. 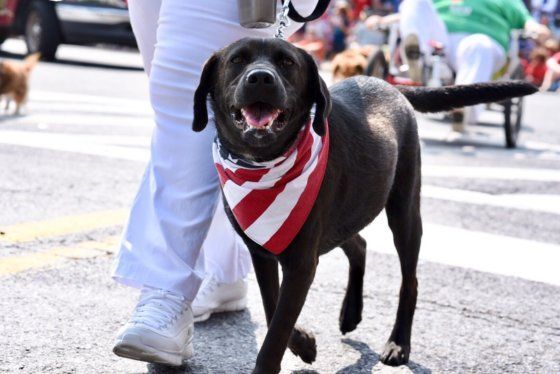 See photos of Fourth of July celebrations in and around the D.C. area.