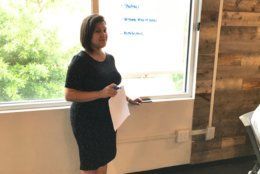 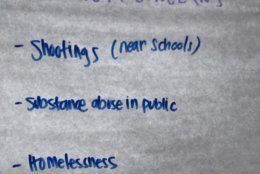 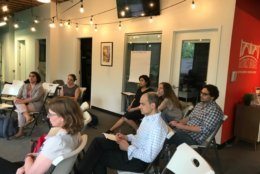 Police have boosted area patrols, but neighbors are being advised that they can help stem the tide of gun violence by volunteering their time.

In February, a man was shot to death near Harriet Tubman Elementary School. Then last month, two more men were wounded in another shooting near the school in the 3100 block of 13th Street NW in Columbia Heights.

Residents came together Wednesday evening for a public safety meeting of Advisory Neighborhood Commission 1A. Those who asked about the recent spike of gun violence were told that gang members dislocated from other neighborhoods have moved into Columbia Heights, sparking conflict and contributing to the problem.

“Individuals who don’t know each other from different gangs are now fighting internally and these individuals are targeting each other,” said Angelica Castanon, Advisory Neighborhood Commissioner, 1A06.

Residents were told that while police have beefed up resources, police can do only so much. Community members must also get involved.

“We have a lot of volunteer opportunities for mentors, weekend reading programs, after school programs, summer programs, and this addresses more the prevention side of public safety issues,” said Castanon.

City-run drug prevention programs and youth centers are stepping up efforts against violence. So are nonprofit groups in the community, including the Salvation Army.

“As summer gets closer you’re going to see more of an uptick in violence and MPD and the various agencies have been doing a good job of addressing some of that,” Castanon said.