The first of more than a dozen bus islands, which also provide a protected bicycle lane, is being built on 14th Street Northwest as part of a major project to improve transportation and livability.
Listen now to WTOP News WTOP.com | Alexa | Google Home | WTOP App | 103.5 FM
WTOP/Neal Augenstein
(1/5) 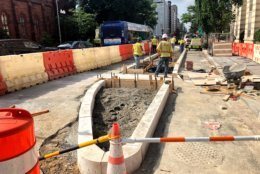 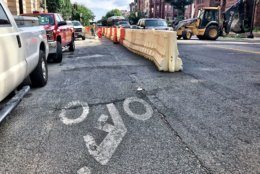 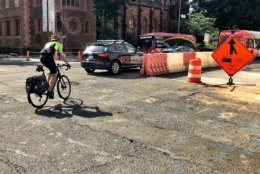 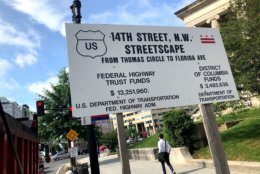 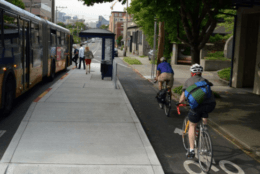 Share on Facebook. Share on Twitter. Share via email. Print.
The first of what will be more than a dozen concrete bus islands that also provide a protected bike lane is going up on a busy stretch of 14th Street Northwest, as part of an adventurous project to make the commuter route more liveable, driveable and bikeable.

For commuters, the project will begin at Florida Avenue Northwest and run about a mile to Thomas Circle.

While the District has created a network of bicycle lanes, including ones protected behind parked cars, bike commuter Drew Stuyvenberg said the concrete islands will provide an extra level of safety on busy 14th Street.

“Right now it’s really just a paint stripe on the road, to demarcate the bike lanes, and some (drivers) feel at liberty to use that as a place to load or unload,” Stuyvenberg said.

Despite ongoing construction, lane shifts and limited visibility on 14th Street to accommodate the new islands, Stuyvenberg continued to use the route on Thursday.

“I feel safer on 14th than most of the other routes, largely because of the bike lanes,” Stuyvenberg said. “On top of that, the light timing’s better on 14th, so it’s a short-term headache for some long-term gain.”

Eventually, bus shelters will be erected on the bus islands, which will act as a buffer for a 5-foot bike lane that will include a curb to separate it from sidewalks.