The National Park Service is still deciding how to save a white mulberry tree near the Washington Monument that uprooted last weekend after heavy rains. The tree is believed to be more than 100 years old.
Listen now to WTOP News WTOP.com | Alexa | Google Home | WTOP App | 103.5 FM

The National Park Service is still deciding how to save a white mulberry tree near the Washington Monument that uprooted last weekend after heavy rains.

Park service spokesman Mike Litterst told WTOP they expect to have a plan of action in place by sometime next week. The tree is believed to be more than 100 years old.

In the meantime, the tree’s exposed roots are being watered twice a day.

The tree is one of several on and around the National Mall that are considered “witness trees” of national significance.

Arborist and tree crew supervisor Jason Gillis provides an update on the plans to save the mulberry tree on the grounds of the Washington Monument. pic.twitter.com/2rb338B9Fq

Other “witness trees” include the magnolia trees on either side of the south portico of the White House that President Andrew Jackson planted in 1829 to remember his late wife, and the Jefferson Elm north of the Smithsonian Freer Gallery of Art, which is one of the original 300 elm trees planted on the National Mall in the 1930s and is resistant to Dutch elm disease. 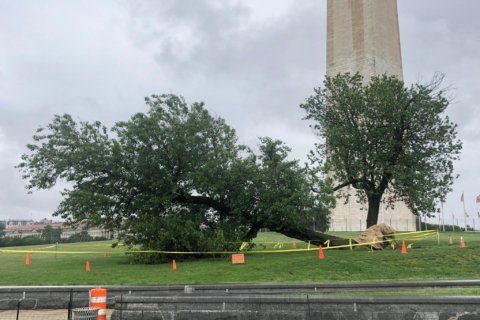