The D.C. government has been painstakingly checking whether any of its current and former employees served during World War II. This year, they honored a man who could be the last-surviving one.
Listen now to WTOP News WTOP.com | Alexa | Google Home | WTOP App | 103.5 FM

Surrounded by loved ones he didn’t expect to see gathered at the Wilson Building, Leroy Tonic, 95, was celebrated and honored on Friday as the last-surviving D.C. government employee who served in World War II.

“I just want to thank everyone for coming out and everyone who participated in honor of my father today,” daughter Taenia Tonic said while barely holding back tears. “I didn’t think I was going to make it today … and I made it. I love you, Daddy.”

Leroy Tonic’s daughter, son, grandson and daughter-in-law giggled and laughed together while sharing warm greetings with a surprised Tonic.

When Mendelson presented Tonic with the flag, council staff and city employees who were present stood and clapped. Some thanked Tonic for his service.

“It’s a real honor to meet you. I’ve never met a World War II veteran before,” said Kelly Whittier who works in the office of D.C. Ward 3 Councilwoman Mary Cheh.

“I think it’s just wonderful to recognize his sacrifice,” Whittier said. “There are residents who served who are still with us, and we should still be giving them this praise and honor and appreciation.”

Family members said they remember Tonic working for the CIA in Langley, Virginia, perhaps in the mail room, but they were unaware of his service with the D.C. government. Tonic has Alzheimer’s disease and hasn’t been able to provide that information.

But, Tonic’s name is listed on a recently restored plaque that hangs in the Wilson Building.

“The 1,869 people on that memorial, we know they all worked for the D.C. government; and we know they all served during World War II,” said D.C. Council spokesman Josh Gibson. “So, we know definitively that Mr. Tonic did both things.”

It took a determined effort on the part of Gibson to track down Tonic and his family members in time to pay him appropriate tribute.

“Ever since Memorial Day of 2016, we have been researching names from the memorial, a few at a time, hoping to find a living veteran and former D.C. government employee to honor,” Mendelson said. “The research process for each name was painstaking and frustrating and always ended with an obituary.” 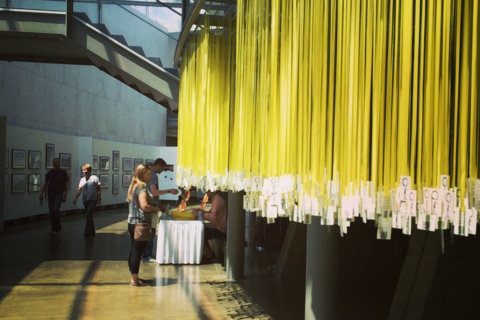 Thousands of yellow ribbons honor the fallen in Arlington