For the last 12 years, the Greene Turtle at Capital One Arena has seen fans celebrate and commiserate after games. Now, patrons and employees are reflecting on the bar as its permanent closing approaches. See photos.
Listen now to WTOP News WTOP.com | Alexa | Google Home | WTOP App | 103.5 FM

For 12 years, it has been a place for Wizards and Capitals fans to celebrate and commiserate with one another. A stop for concertgoers coming in and out of Capital One Arena to see some of the biggest acts.

Now, employees and patrons are looking back at their time at the Greene Turtle at Capital One Arena as it gets closer to completely closing its doors for good. 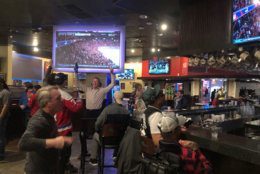 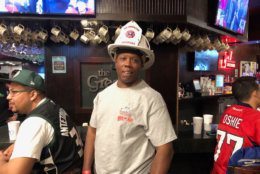 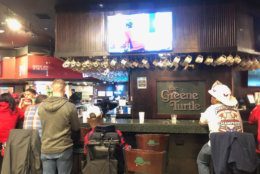 Borges has already had to say goodbye to some of his fellow co-workers when the restaurant stopped daily operations on April 9. The bar will remain open on home game nights for the Capitals during the playoff run. After that, it will close down for good.

The restaurant being attached to Capital One Arena made it a unique place to work, one that Borges said he will miss.

“You can see from John Wall to Ovechkin, just walk in like they’re normal people, in the morning and the afternoon,” Borges said.

It wasn’t only sports stars he got to meet, he said, but other celebrities performing at the arena as well.

“I got stuck with Demi Lovato on an elevator with her and that was a cool sight,” Borges said.

When he’s not serving as captain of D.C. Fire Engine Company No. 5, Robert Washington can be seen taking in a game at the Greene Turtle. It has been a great place for D.C. sports fans to come together, he said.

“This place has been an institution and it is sad to see it go. I understand the reason that it is going and I can’t say that I like it, but I understand,” said Washington.

The Greene Turtle location is shutting down after the company announced it had agreed to a lease buyout from Monumental Sports and Entertainment. The site is expected to be transformed into a sports betting location after D.C. legalized sportsbooks.

When Brody Lynch didn’t have tickets to a game, he would still come to the Greene Turtle because the ambience and staff made it feel like he was inside the arena, he said. Lynch also admitted a lot of good times were had at the Greene Turtle, many of which he joked he didn’t remember.

“I’m going to miss it, but I’m really excited about what’s to come,” Lynch said.

Patron Hugo Blankingship believes that turning the site into a sports betting location is a great idea.

“We’ll miss the Turtle, but it will be a great transformation,” Blankingship said.