Demonstrators packed the steps of the John A. Wilson Building in D.C. on Friday, calling on Mayor Muriel Bowser to do more to reduce traffic fatalities. 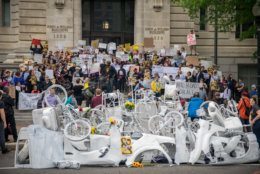 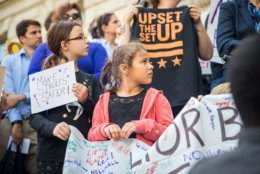 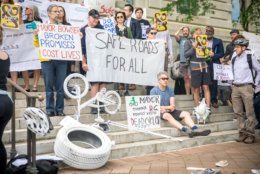 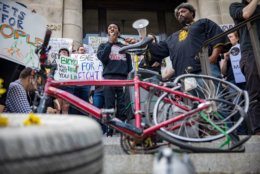 A massive white sculpture made up of bicycles and automobile parts was painted white, a representation of the 128 people made up of pedestrians, cyclists, drivers and passengers, killed in crashes on D.C. streets over the past four years.

The names of those people who died were read aloud, among them, D.C. resident and bike safety advocate Dave Salovesh who was killed in Northeast D.C. last week.

Matthew Sampson, an Advisory Neighborhood Commissioner serving an area that includes Dupont Circle, said that “It’s unacceptable and inexcusable that people continue to die while they’re just walking to the store, or biking to visit their friends, or driving to start a vacation. or something.”

Silverman said no matter how people get around the city — on bikes, on foot, on scooters or in cars — it’s important to “have the infrastructure in place to make it safe for you to do that.”

A representative from the Bowser administration addressed the crowd, saying that the District will continue to work toward its Vision Zero goal by 2024.

Aimee Custis, an activist and cyclist, attended the protest and said that “Traffic violence affects everyone.”

She explained why many protesters were focused on infrastructure, such as protected bike lanes and roads with traffic-calming design. Two of the most recent deaths in the District involved drivers who were allegedly speeding. The crash that killed Salovesh occurred at the Florida Avenue and 12th Street NE intersection, an area that has long been the focus of complaints about its poor design. Police said that the driver of the vehicle that struck Salovesh was driving a stolen van and evading police.

Custis said, “We want to build infrastructure that protects everyone on the streets” even, she said, when user behavior “is not perfect.”