While the number of people killed on D.C. area roads has spiked recently, regional leaders aim to keep traffic deaths at an average of 253 a year.

WASHINGTON — While the number of people killed on D.C. area roads has spiked recently, regional leaders aim to keep traffic deaths at an average of 253 a year.

Cutting the five-year rolling average number of fatalities to 253 would require a dramatic and sudden drop in deaths in 2019.

The Transportation Planning Board is due to readopt that goal by the end of February, even though it appears the region has fallen far short of meeting it since 2014.

Snyder has chaired a number of regional transportation bodies over the years. “But in the area of highway safety there’s nothing to be proud of here, in fact it’s a tragic failure regionwide and in each of the states,” Snyder said.

Virginia and Maryland have promised efforts “toward zero deaths,” while D.C. has promised to embrace “Vision Zero.” But even small transportation changes can take years to implement. Nationwide, deaths on the road account for about 95 percent of all transportation-related deaths each year.

In 2017, the latest year with full National Transportation Safety Board data available, 37,133 people died in crashes on U.S. roads. The NTSB sees those crashes as preventable.

“It isn’t just the departments of transportation that are responsible for this. Frankly, it’s each and every one of us,” Snyder said.

“The first thing you can do is realize that driving is the most dangerous thing that you do in a typical day unless you’re a police officer or a firefighter … a few seconds can make the difference between a life saved and a life lost or a serious injury to yourself or others,” he added. “Basically, chill out.”

An average of 549 people walking, biking or otherwise outside of a car were either killed or seriously injured each year. 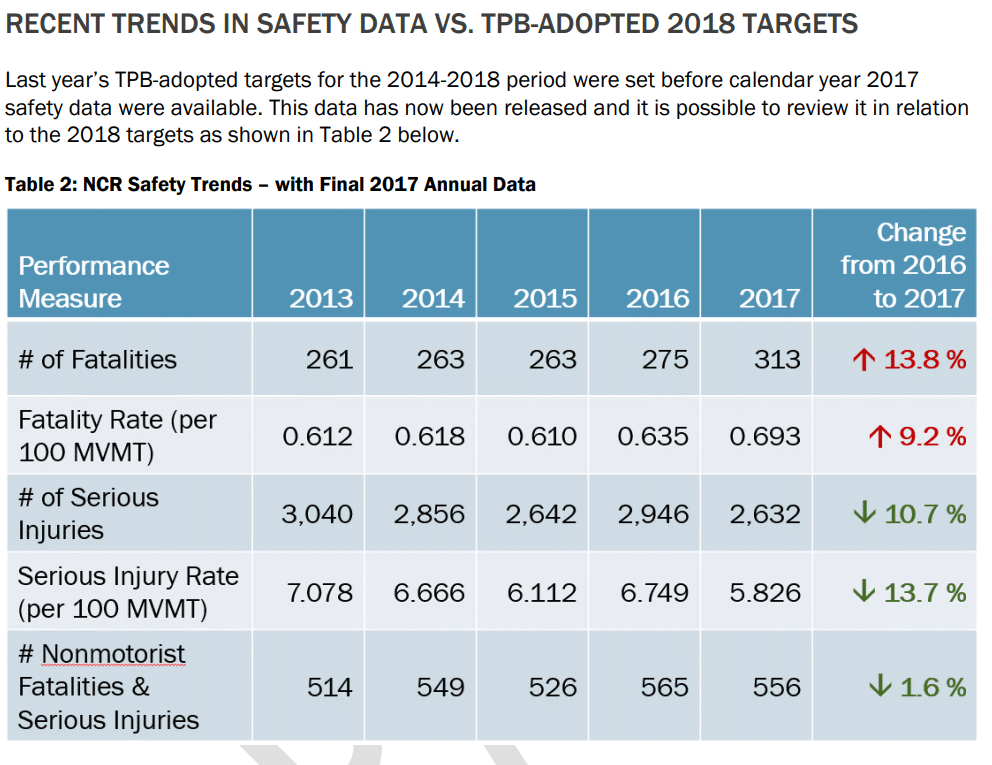 “With 2017 data now in, it is challenging to meet the adopted 2014-2018 fatality and fatality rate targets,” a presentation due to be given to the Transportation Planning Board next month said. “Preliminary data show that 2018 was not good for fatalities. However, serious injuries and serious injury rates look better,” it said.

A regional study is planned of traffic deaths and injuries. The Transportation Planning Board plans to maintain its goal of 253 deaths per year, but would aim for somewhat fewer serious injuries than the prior goal.

The board could also call for “the region to redouble their efforts to develop projects, programs and policies to achieve dramatic reductions in fatalities and serious injuries,” while acknowledging “recent trends for both fatalities and the rate of fatalities per 100 million vehicle miles traveled are moving in the wrong direction.”

Final 2017 data in showed a 13.8 percent increase in fatalities compared to 2016, continuing an upward trend since 2013. Serious injuries in the Washington area declined 10.7 percent over the prior year in what has been more of an up and down trend.

“While official numbers are not yet available, it is clear from the state data that has been made available that the number of fatalities in 2018 is not dropping and may be increasing over 2017 levels. Based on these factors, it is very unlikely that the regional targets for these two performance measures will be met,” Transportation Planning Board staff wrote.

In a new step, the 2019 goals are due to include breakdowns of deaths and injuries in each Maryland, Virginia and D.C. The proposed goals would significantly raise the fatality and serious injury rate targets in the District where many people are getting around without a car, while keeping the target rates relatively flat or down slightly in Maryland and Virginia.

Snyder would like to see an even bigger focus on saving lives, including tougher goals. Federal rules say the goals must be data-driven and realistic.

“It really requires us to go back to a sense of civility and a shared notion that we’re all sharing the highways and the transportation systems together, and that we need to act as though we’re part of a community here as opposed to individuals doing what they want the way they want it when they want it,” Snyder said.

Between traffic jams, speeding, distracted driving and people constantly in a rush, he believes a major mentality change is needed.

“Just a breakdown in driving behavior overall: people routinely ignoring the rules and basic rules of physics, so it’s a real challenge for us,” Snyder said. “I think we need a more sustained public education and information effort to remind people that it really is critical that you drive safely.” 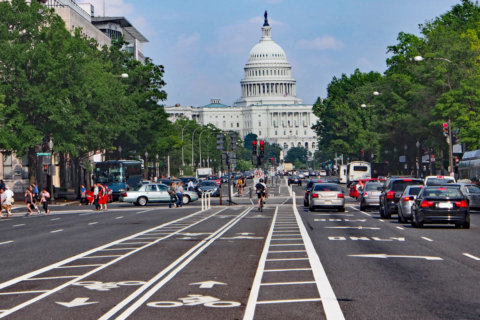