Members of the Jewish community and D.C. leaders held a vigil outside the Lubavitch Center in the Kalorama neighborhood, to pay tribute to the victims, and denounce hate in the wake of the second synagogue shooting in less than a year.
Listen now to WTOP News WTOP.com | Alexa | Google Home | WTOP App | 103.5 FM
(1/3) 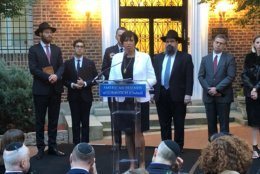 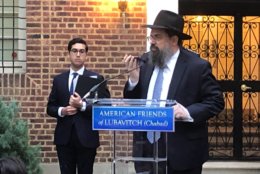 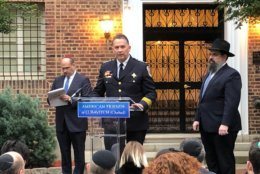 Her eyes fill with tears, every time Rochelle Behrens thinks about Saturday’s shooting at the Chabad synagogue in Poway, California that left one woman dead, and three injured.

Behrens attended the Poway temple when she was growing up.

“We actually had tentative plans to be in California at my parents’ house, last weekend, but we had a change of plans,” said Behrens, standing in front of the Lubavitch Center on Leroy Place Northwest, during a solidarity rally, Monday evening. “I can’t help to not only think of the victims of this tragedy, but also, more personally, what could have been.”

“Poway is a place where diversity is celebrated, and where I learned tolerance,” Behrens said. “It truly was, or seemed, like a colorblind community.”

Brandon Messian, a George Washington University student, was a fellow congregant and longtime friends of Lori Kay, who was killed in the shooting.

“Not only did Lori play an integral role in establishing Chabad of Poway, she devoted her life to helping others and spreading Judaism across the community,” Messian said. “She always greeted everyone with a warm smile, and made sure all felt welcome.”

With D.C. Mayor Muriel Bowser and D.C. Police Chief Peter Newsham on hand, Rabbi Levi Shemtov and Jewish leaders spoke to an overflow crowd at American Friends of Lubavitch on Monday night to denounce hate in the wake of the second synagogue shooting in less than a year.

“While we gather in sadness this evening, we also gather with a great sense of defiance,” Bowser said. “We will not give in to those who wish to divide us, so we

Multiple leaders from the Jewish community were also in attendance. More people reserved for the event than the venue could accommodate, so the nearly hour-long solidarity gathering was held outside so all could attend.

“To be very honest with you, I don’t want to be here,” Shemtov said. “Choices made by others have caused us to be here.”

“We’re here for three reasons,” Shemtov said. “We’re here to be grateful for the fact that there was that miracle that saved more death from occurring — more senseless death — we’re here because we want to show who we are, and that we will never be afraid, and finally, we are here to send a message to anyone who might think of copying that evil man who perpetrated that act of terrorism on Saturday, and tell him and everyone like him and everyone who thinks like him: You will fail.”

“We will smother the crackle of your gunfire with acts of goodness, kindness, positivity and light, which will make this world you’re trying to destroy much better than it ever was before,” said Shemtov.

Newsham told the gathering that violence in houses of worship isn’t limited to one religion.

“We cannot allow this violence to become normalized,” said Ron Halber, executive director of the Jewish Community Relations Council of Greater Washington. “We Jews cannot eliminate anti-Semitism. It is a chronic disease.”

“We can control some of the symptoms, sometimes we can combat it effectively, but we don’t have the antidote. So while we can’t control what people do, we can control our reaction to them,” said Halber.

WTOP’s Neal Augenstein and Mike Murillo contributed to this report. 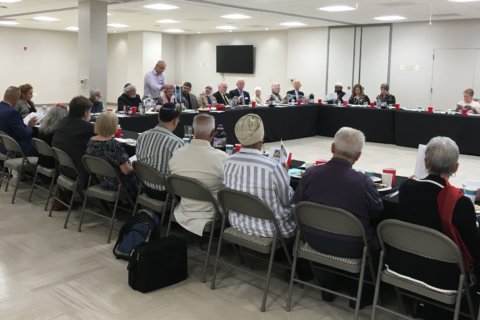