A man and a woman linked to a shooting inside a crowded H Street restaurant in January have both been arrested, D.C. police said Tuesday.
Listen now to WTOP News WTOP.com | Alexa | Google Home | WTOP App | 103.5 FM

The man seen on surveillance video shooting another man inside a crowded H Street restaurant in January and the woman who helped him retrieve his handgun from the bloodied floor have both been arrested, D.C. police said Tuesday.

Deago Antonio Belton, 27, and Timara Williams, 24, both of Northeast D.C., have been charged with assault with intent to kill.

The arrests come two weeks after D.C. police released the surveillance video from inside Quara Ethiopian Restaurant at 818 H St. in Northeast D.C. that showed the Jan. 27 shooting.

At a news conference last week, police publicly identified Belton and Williams as suspects in the shooting.

Police said Belton was arguing with another man when he pulled out a handgun and shot the other man several times. The man survived the shooting and was taken to the hospital for treatment of his injuries.

Last week, another man, 26-year-old Delonte Wesley Rouse, was arrested and charged with assault with a dangerous weapon. The surveillance video appears to show him slamming a bar stool over the head of the man who was shot. 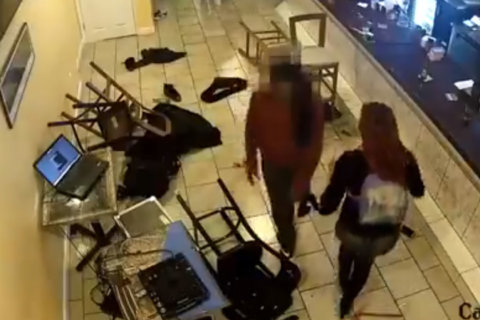 Police search for 2 other suspects in H Street shooting, assault