At DC’s Basilica, SNAP details how to help survivors of priest sex abuse

An organization that serves survivors of sexual abuse by Catholic priests is responding to the Pope's points of action with their own list of ways Catholics can help victims every day.
(1/2) 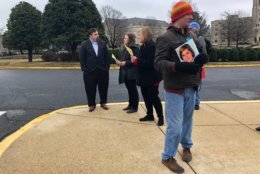 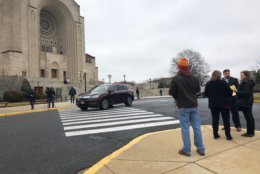 WASHINGTON — An organization that serves survivors of sexual abuse by Catholic priests is responding to the Pope’s points of action with their own list of ways Catholics can help victims every day.

The Survivors Network for those Abused by Priests (SNAP) released a list of 21 things that they say everyday Catholics can do to help the crisis. Local leaders handed out copies to people as they left mass at the Basilica of the Shrine of the Immaculate Conception Sunday morning.

“When I listened to those eight points, I thought of them as being very vague, and they weren’t really some action points,” said Becky Ianni, who leads SNAP’s local chapter. “It’s really important that we keep vigilant, and that we work towards holding the church accountable and pushing them to take action on some of the items they listed.”

Listening, donating to organizations that help victims and educating people about sexual abuse are all on SNAP’s list of things people can do to help. Ianni, a survivor of sexual abuse at the hands of a priest herself, says that the Pope’s points of reflection sounds like it’s mostly just talk.

“One of the things that struck me was that he said that he wants bishops and cardinals to understand the severity of this problem. And I think as a survivor, you know, as an 8-year-old I knew how severe this was, I knew how devastating this was. So I don’t know why this is one of the points,” said Ianni.

Some members of SNAP made the trip to Rome for the Pope’s summit, with the hope of contributing to the solutions that the meetings hoped to find. But those who went told the National Catholic Reporter that none of their suggestions made it on to the Pope’s list.

“If you’re a survivor, know that no matter what the Pope does, SNAP is going to be there for you,” said Ianni.