Former Cardinal Theodore McCarrick was found guilty by the Vatican of sex abuse and became the first American Cardinal to be defrocked. Now, area parishioners are reacting to the news of the one-time leader of the Archdiocese of Washington's fall from grace.
Listen now to WTOP News WTOP.com | Alexa | Google Home | WTOP App | 103.5 FM

WASHINGTON — Former Cardinal Theodore McCarrick was found guilty by the Vatican of sex abuse and became the highest-ranking churchman to be defrocked. Now, D.C.-area parishioners are reacting to the news of the one-time Archbishop of Washington’s fall from grace.

The steps outside St. Matthews Cathedral in Northwest D.C. were just as busy as any other Sunday.

“I think that justice was done,” said St. Matthews parishoner John Gizzi. “I say this as someone who admired McCarrick for the fundraising that he did for the church as well as the face he put on when the crisis about pedophilia began. Obviously he turned out to be a flawed messenger.”

One parishioner at the Shrine of the Most Blessed Sacrament in D.C. told WTOP that the recent news has not dissuaded her faith in the church, and feels that the efforts being made by the Vatican to route out abuses of power and sexual misconduct show the church is trying to set things right.

“I’ve been coming to church for years and it doesn’t affect my feelings towards the church in general,” she said.

Another parishioner, Grace, said everybody is a sinner.

“Each one has to reach to their conscience and see how good they are before they condemn others,” she said. “And, we have to pray.”

Reverend William Foley currently leads the parish and told WTOP after Saturday’s announcement, he’s looking toward the work that the church has to do and not dwelling on the disgraced Cardinal.

“It’s kind of anti-climatic,” Foley said. “What we’re all looking forward to is our new bishop and getting on with the rest of what we have to do.”

Now that he has been defrocked, McCarrick is no longer able to take part in mass or any other sacrament of the church. 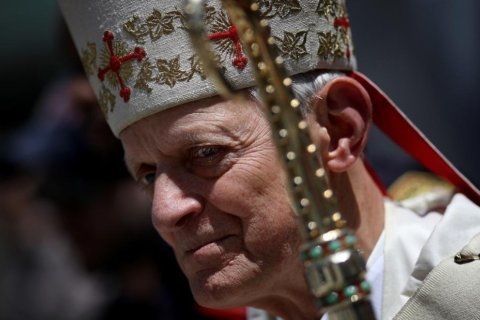