Daron Wint was convicted last fall of four counts of first-degree premeditated murder in the brutal slaying of three members of a D.C. family and their housekeeper in 2015
Listen now to WTOP News WTOP.com | Alexa | Google Home | WTOP App | 103.5 FM

WASHINGTON — The Maryland man convicted in the brutal slaying of three members of a D.C. family and their housekeeper in 2015 has been sentenced to four consecutive life sentences without the possibility of release.

That is the harshest penalty Daron Wint could face in the District, and the sentence sought by prosecutors.

Wint was convicted last fall of four counts of first-degree premeditated murder in the deaths of Savvas and Amy Savopoulos; their 10-year-old son, Philip; and Vera Figueroa, the family’s housekeeper. Firefighters discovered their bodies inside the family’s burning Northwest mansion in May 2015. Wint was also convicted of a slew of other counts, including burglary, arson and extortion.

D.C. Superior Court Judge Juliet McKenna cited the “incomprehensible suffering” of the victims, which she said should leave Wint without “any opportunity for release.”

Prosecutors said the victims were tortured as Wint held them captive for nearly 24 hours. They were beaten with a baseball bat and stabbed before the house was set ablaze. Assistant U.S. Attorney Laura Bach called the killings “by far one of the most heinous crimes anyone has ever committed” in D.C.

In pressing for the strongest possible sentence for Wint, Bach said, “We want the court to take away his hope.”

The sentencing followed several emotional statements read in court from the family members of the victims, including from the two Savopoulos daughters who were away at boarding school at the time of the killings.

In letters read in court, the two sisters described how their lives were shattered by the killings.

“We toured cemeteries instead of colleges and searched for the perfect coffin instead of the perfect prom dresses,” Katerina Savapoulos wrote in her letter, which was read by a victim’s advocate. She did not attend the sentencing.

“My parents were my best friends. I came to them in the good and the bad times,” Abigail Savopoulos said. “They were my biggest supporters and my strongest advocates. My parents loved each other more than any other couple I ever met. They taught me what true love looked like.”

Their father, a successful businessman, was loving, funny and always put family first. Mother, Amy, wrote letters every week, signing each one “xoxo Mom.” Philip, 10, was wise beyond his years, obsessed with Harry Potter, baseball and Go-Kart racing.

The two daughters also shared remembrances of Figueroa, who they said was far more than a household employee. “Vera was always a constant in my life,” Katerina Savopoulos wrote, who taught her how to curl their hair for school dances and made the best soup when she was sick.

In her letter, Katerina Savopoulos said she struggled with nightmares and panic attacks after the killings and even hearing Wint’s name “would trigger immediate anger and fear.” But she said she has come to a place where she forgives Wint.

“You can’t fire with fire and you shouldn’t fight hate with hate … These are things we can never forget and will probably never understand – but we can forgive. Hating the people who hurt us will not right any wrongs she wrote,”adding “That is why I forgive Wint for his trespasses.”

Other family members and family friends asked the judge to impose the strongest sentence.

“Until the day Daron Wint stole them away, the Savopoulos family represented the American dream,” one family friend told the judge.

In a wavering voice, Jim Martin, Amy Savopoulos’ father, said he hoped the judge would “banish” Wint to a lifetime of imprisonment.

Wint, who sat quietly in an orange jail jumpsuit, did not make a statement, which is customary if a conviction is appealed. The appeals process could take several years.

In a brief statement in court, Judith Pipe, with the District Public Defender Service, called the killings “horrific and unforgivable” but said Wint maintains his innocence.

During his nearly six-week trial, Wint took the stand in his own defense to try to pin the killings on his two brothers.

Prosecutors said there was no evidence linking Wint’s brothers to the killings and that he was simply lying.

“Every single person has a right to a trial. But you do not have a right to come in here and falsely accuse two innocent brothers,” Bach said. She said Wint “lied to the jury; he lied to the court; he lied to everyone, and he didn’t care.”

Wint was tied to the killings by forensic evidence, including his DNA, which was recovered from the crust of a Domino’s pizza that had been delivered to the Savopoulos house while the victims were behind held hostage.

Prosecutors said the motive was greed, that Wint was obsessed with the idea of easy money and, at the time of the killings, was out of work and desperate for cash.

While the victims were being held captive, prosecutors said Wint forced Savvas Savopoulos, the CEO of the family-owned American Iron Works, to withdraw $40,000 form his bank account and have it dropped off at the house.

Wint once worked as a welder for the company. 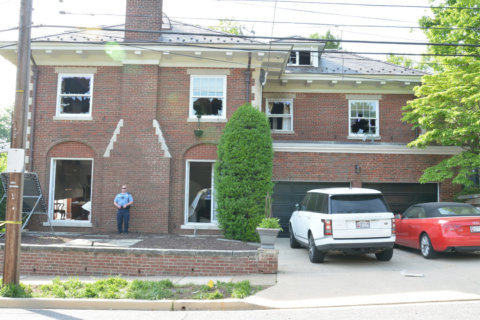 Follow WTOP's coverage of the trial as it happened