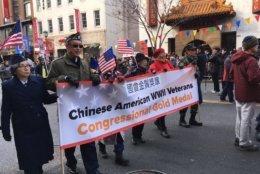 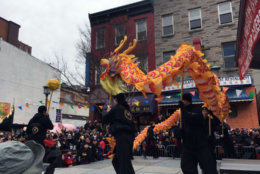 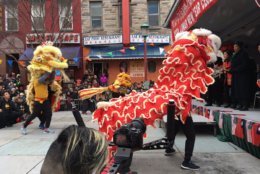 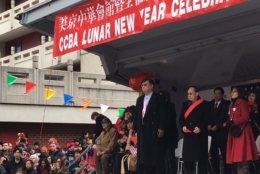 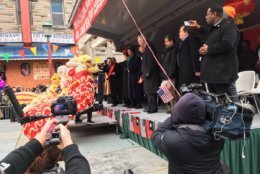 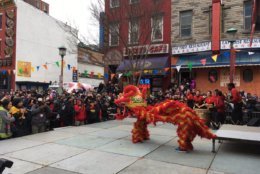 WASHINGTON — Folks lined the streets of downtown D.C. Sunday afternoon to celebrate Chinese New Year. It was a community affair to ring in the year of the pig, which represents wealth, fun and good fortune.

A crowd several rows deep packed the streets around the Friendship Archway in Chinatown. People stood on bus stop benches, clustered by restaurant entryways and huddled together behind metal stanchions to watch the parade.

A gathering for an afternoon of community and celebration of Chinese New Year — The Yearod the Pig — which represents wealth, fun, and good fortune. @WTOP pic.twitter.com/Shjgo30IYd

The parade and ceremony was hosted by the Chinese Consolidated Benevolent Association — an umbrella group which represents 30 Chinese-American organizations across the D.C. area.

A procession of city officials, including Mayor Muriel Bowser and several city council members, led the parade, followed by a dozens of area community clubs and educational organizations.

It was a frigid afternoon, but the low temperatures didn’t stop celebrants from braving the cold to watch the fireworks.

Fernando, who declined to give his last name, came with his family from Northern Virginia to take part in Sunday’s huge party. It was his first time attending.

He said he’ll be back next year.