The videos show the man trying to destroy the surveillance equipment at Comet Ping-Pong while a fire burns in the background on Jan. 23.
Listen now to WTOP News WTOP.com | Alexa | Google Home | WTOP App | 103.5 FM

WASHINGTON — The D.C. Fire Department has released video footage of the man they said started a fire inside Comet Ping-Pong last week.

The videos show the man trying to destroy the surveillance equipment while a fire burns in the background a little after 9 p.m. on Jan. 23. D.C. Fire and EMS said that a “minimal” amount of damage was caused, and that restaurant workers put out the fire before firefighters got there.

The man is described as white, in his late 20s, with blond hair, a mustache and a beard.

It’s the second time in recent years that the restaurant has come under attack. A North Carolina man entered Comet on Dec. 4, 2016, with an assault rifle and fired a shot into a cabinet. He was convinced of a bogus conspiracy theory that the restaurant was harboring child sex slaves.

The man, Edgar Maddison Welch, pleaded guilty to a federal charge of interstate transportation of a firearm and ammunition as well as a D.C. charge of assault with a dangerous weapon and was sentenced to four years in federal prison in June 2017. 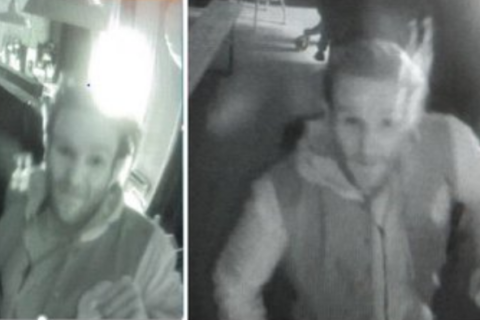