For years, D.C. police had trouble keeping officers. Now, the department is operating nearly at full force, and the city is starting a new program asking residents to weigh in on how officers are doing.
Listen now to WTOP News WTOP.com | Alexa | Google Home | WTOP App | 103.5 FM

WASHINGTON — For years, D.C. police had trouble keeping officers. Now, the department is operating nearly at full force, and the city is starting a new program asking residents to weigh in on how officers are doing.

“Three years ago, we were losing police officers by the dozen every week, almost. We worked hard to stabilize those losses,” Deputy Mayor of Public Safety Kevin Donahue told city leaders on Tuesday.

“But, we also know people don’t want officers sitting in cars. So, the mayor is committed, as that growth happens, that growth will be in bike and foot patrol,” Donahue said.

This year, Donahue said an independent firm that has worked with police departments in New York, Los Angeles and Chicago will start routine community surveys to gauge the effect of increased policing.

“This tool is going to be able to provide the police department with valuable feedback,” said D.C. police Chief Peter Newsham, who added that data collected will be available to the public. 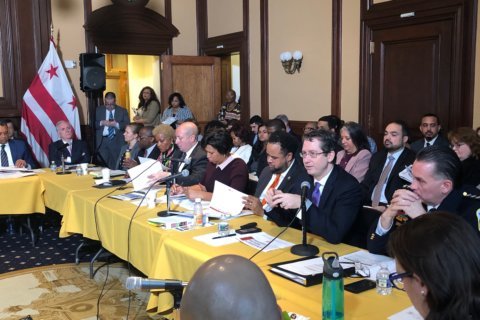 Mayor: No change in police tactics despite year’s violent start