One dead, 3 injured in crash near National Mall

One person is dead and another in critical condition following a crash near the National Mall on the Sunday before Christmas.
(1/3) 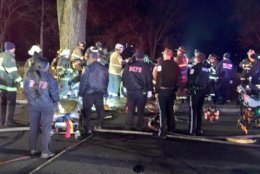 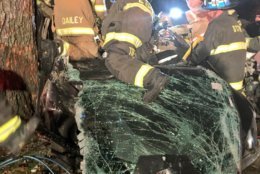 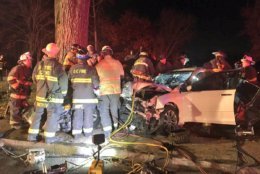 WASHINGTON — One person is dead and another in critical condition following a crash near the National Mall on the Sunday before Christmas.

A D.C. fire official said four people were involved in a two-vehicle collision on Constitution Avenue near 19th Street in downtown D.C., near the Department of the Interior, just after midnight Sunday.

A series of videos tweeted by D.C. Fire and EMS show rescue workers attempting to free crash victims from two vehicles pinned against a tree.

A man and a woman were extricated and transported to a hospital via U.S. Park Police helicopter, where the man later died. His name had not been made public as of Sunday morning.

Two additional victims suffered injuries that were not life threatening.

Arrest made in stabbing at Union Station Metro