Allie Bobak — with the help of school counselor Sandra Montgomery, Maribel Vargus, the school’s assistant principal, and others — worked to save the man who had a close connection to the school.
Listen now to WTOP News WTOP.com | Alexa | Google Home | WTOP App | 103.5 FM
(1/2) 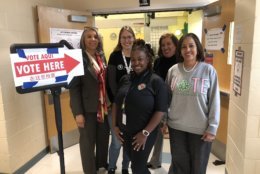 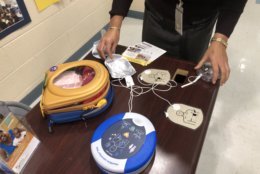 WASHINGTON — For Allie Bobak, her job Tuesday at a polling site at Barnard Elementary School in Northwest was to only serve as a nonpartisan observer with the organization Observe DC. But that job quickly took on the added role of saving a life after a man collapsed at a ballot station.

“Immediately everyone rushed to him,” Bobak said.

Bobak — with the help of school counselor Sandra Montgomery, Maribel Vargus, the school’s assistant principal, and others — worked to save the man who had a close connection to the school.

The 75-year-old was a retired custodian who spent several years at the school.

Montgomery said she tried to comfort the man by holding his hand, which was cold to the touch. The counselor said she struggled to control her emotions as she tried to reassure the man.

First the women called 911 and on the other end of the call, D.C. 911 call-taker Jenee Wood began to instruct the women on what to do.

“The keyword is that he was snoring and I know from my training that’s agonal breathing, so that’s when I said we need to get someone to initiate CPR,” Wood said.

While one woman began giving the man CPR, Bobak said she ran to the lobby where the school had a prominently placed automated external defibrillator, and ran back to the polling site with it.

“It tells you when to stop touching, then it tells you to keep going and it has the lights, so it’s super clear; I was very impressed,” Bobak said.

As people found pillows and others made space for the women to work, the team of good Samaritans worked on the man for minutes. More than one of the women said those few minutes felt a lot longer, especially when it appeared that the man stopped breathing.

“We were just switching off who is giving CPR because it needs quite a bit of strength and applied the AED and gave two shocks until the EMTs arrived,” Bobak said.

The combination of the women’s refusal to give up and the AED, resulted in the man not only beginning to breathe again, but also regaining consciousness.

D.C. Fire and EMS firefighter and paramedic Christopher Boyette praised the women for what they did to help the man.

“We saw that they successfully used the AED and the gentleman was already starting to wake up. He had already regained consciousness by the time we got here,” said Boyette said.

According to D.C. Fire and EMS, AED’s are in place at all schools in the city and those devices have made a difference in 6 percent of the cardiac arrest cases the department handled in the 2018 fiscal year. Vargus said what took place showed the importance of having the lifesaving device at the ready.

“We’re very happy to be able to have supported, and made a difference in someone’s life,” Vargus said.

Wood said the women should be commended for keeping their composure and listening to her instructions even under the immense pressure, which she said can be a struggle in these situations.

“We as a community saved a life today,” said Wood. 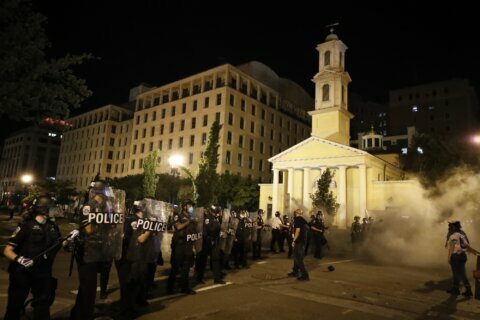