"Some of us standing here could have been one of these flags but for an intervention," says one veteran. In all, 5,520 postcard-size flags were planted on a patch of grass between the Washington Monument and 15th Street to represent veteran suicides occurring in 2018 through Wednesday.
Listen now to WTOP News WTOP.com | Alexa | Google Home | WTOP App | 103.5 FM
(1/4) 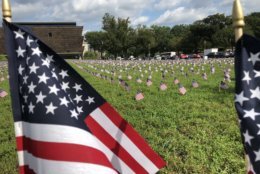 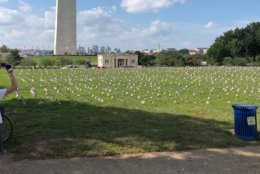 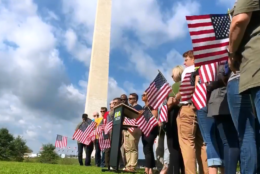 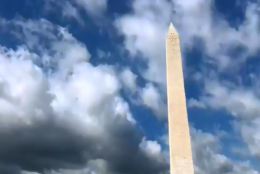 WASHINGTON — Planting what eventually looked like a carpet of fluttering American flags, veterans groups were on the National Mall Wednesday to raise awareness about veteran suicides.

“Every last one of us had a friend or a family member’s name in mind as we planted these flags,” said Melissa Bryant, Iraq and Afghanistan Veterans of America chief policy officer. “Some of us standing here could have been one of these flags but for an intervention.”

In all, 5,520 postcard-size flags were planted on a patch of grass between the Washington Monument and 15th Street to represent veteran suicides occurring in 2018 through Wednesday. A single line of larger flags represented 20 daily losses of veterans to suicide.

U.S. Army veteran Kristian Rouse, of the New York City Veterans Alliance, told those gathered for a midday news conference that she’s seen far too many comrades fall to suicide and that governments on the local, state and federal level can do more “to ensure that veterans come home to a society that understands and takes care of them.”

Also speaking at the event was Rep. Mark Takano, a Democrat representing California’s 41st District. Citing a federal report released in September, he said veteran suicide is a serious problem with no clear end in sight.

“It also points to new alarming statistics indicating that veteran suicide rates among young veterans ages 18 to 34 are on the rise,” Takano said.

“We need to de-stigmatize and allow for better mental health care to be provided for citizens everywhere,” she said.

Bryant cited Tuesday’s news that Jason Kander, a former Army intelligence officer who served in Afghanistan, was dropping out of the mayoral race in Kansas City, Missouri, to get treated for post-traumatic stress disorder.

“I understand firsthand those struggles,” Bryant said. “And many of my family and friends standing here today know these struggles.” 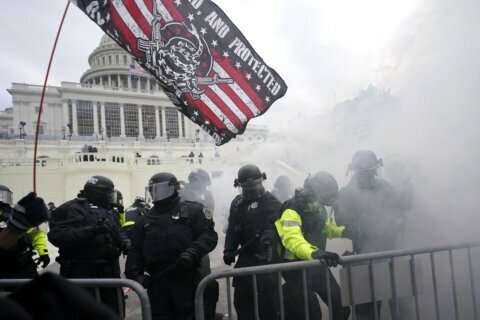