Dramatic video released by D.C. police shows a woman smashing the windows of a Greyhound bus with a car jack, and then ramming and attempting to run down the bus driver in an apparent act of road rage in Northeast D.C. on Thursday.
Listen now to WTOP News WTOP.com | Alexa | Google Home | WTOP App | 103.5 FM
(1/4) 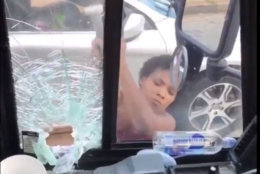 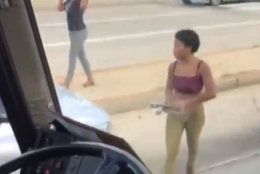 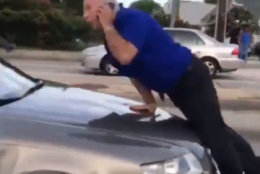 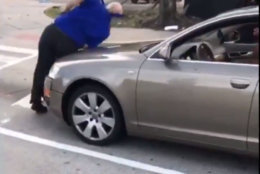 WASHINGTON — Dramatic video released by D.C. police shows a woman smashing the windows of a Greyhound bus with a car jack, and then ramming and attempting to run down the bus driver in an apparent act of road rage in Northeast D.C. on Thursday.

Police arrested 20-year-old Mariana Silver, of Northeast D.C., on charges of assault with a dangerous weapon.

Police said Silver tried to run down the buss driver with her Audi A8 with D.C. tags FV 9179.

The violent outburst came after the woman attempted to illegally pass the Greyhound bus traveling in the 1800 block of Bladensburg Road in Northeast, according to a police report.

As she was attempting to pass the bus, she sideswiped another car, police said. When the driver of that car tried to make contact with her at a red light, the woman “grew irate” and broke out into a verbal argument, according to the police report.

We have identified the suspect involved in this incident that occurred in the 1800 block of Bladensburg Road, NE on 8/30.

The incident was captured on a cell phone video and can be seen below. This case remains under investigation. #DCPolice #HereToHelp pic.twitter.com/wjti63DycR

After the bus driver told the woman, “You’re a crazy driver, you need to get off the road,” the woman retrieved a wooden baseball ball bat from the trunk of her car and began hitting the bus, cracking the windshield, police said.

Then, she pulled out a silver car jack and began smashing the windows.

At one point, he is thrown from the hood of her car and sent tumbling into the intersection. The police report said he suffered bruises and scratches on his left elbow and pains on the left side of his hip.