There will be no major changes this year to rules for dockless bikes and shared electric scooters, the District Department of Transportation said Thursday.
Listen now to WTOP News WTOP.com | Alexa | Google Home | WTOP App | 103.5 FM

WASHINGTON — There will be no major changes this year to rules for dockless bikes and shared electric scooters, the District Department of Transportation said Thursday.

DDOT is again extending the pilot program, this time through the end of the year, rather than implementing permanent rules that could see many more of the vehicles permitted across the city.

The pilot had most recently been set to expire this weekend.

The agency plans to outline plans next month for the longer-term rules that are now scheduled to take effect in January. The new rules will more significantly factor in the electric scooters that have become more common over the last few months.

Under the more permanent rules, each company will need to apply for a permit that lays out fees to the city “to cover administration and public space management costs,” data sharing requirements, equipment and operation standards, a requirement to cover all eight wards of the city, and a performance bond or other enforcement mechanism “to reinforce good management practices.”

In a new addition to the rules, bikes will have to be locked to a bike rack or other post when a user leaves them. That is already how Uber’s electrified JUMP bikes work, and they are the only company still operating a significant number of dockless bikes in the city.

The rule comes after DDOT received complaints about some bikes that were left blocking sidewalks, but the bike designs of the other companies that had put bikes in the District would not be able to follow it.

LimeBikes, for example, some of which are still around the city, could not be locked to a bike rack without modifications to the way they operate.

DDOT is also directing all of the companies to provide information to users “about properly parking and securing bikes and scooters in public space.”

Feedback on the upcoming rules can still be submitted to dockless.bikeshare@dc.gov 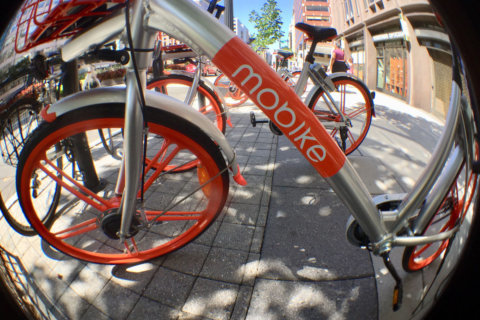