Two dockless bike companies are leaving D.C., but that’s not the end of the bike services that riders can pick up and deposit anywhere in the city.
Listen now to WTOP News WTOP.com | Alexa | Google Home | WTOP App | 103.5 FM
(1/3) 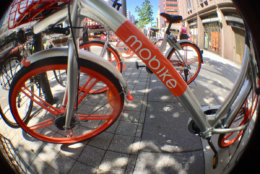 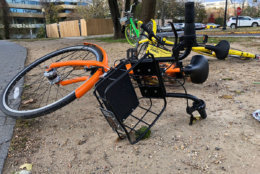 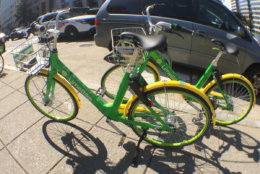 WASHINGTON —  Two dockless bike companies are leaving D.C., but that’s not the end of the bike services that riders can pick up and deposit anywhere in the city.

Ofo and Mobike are pulling out of the District. Both have said being limited to operating with a maximum of 400 bikes under D.C.’s current pilot program puts a crimp in their ability to operate.

“With a 400 bike cap in D.C., it’s difficult to scale the business and effectively serve the entire community,” Taylor Bennett, head of communications for Ofo, told WTOP in an email. The Chinese bike-sharing company has cut its U.S. workforce, but Bennett said, “Ofo is scaling back in the U.S. but not exiting altogether.”

When asked about the departure of the companies, D.C.’s Department of Transportation forwarded a statement from DDOT Director Jeff Marootian, noting the study period is still underway: “We appreciate the participation of all the companies and interested stakeholders and look forward to using the information collected during the demonstration project to arrive at long-term options for the use of dockless vehicles in the District.”

Though Ofo and Mobike are leaving, a number of transit and cycling advocates are petitioning for more — not fewer — dockless bikes in the District.

The Washington Area Bicyclist Association is among those pushing for as many as 20,000 dockless bikes to be made available in D.C. Robert Gardner, with the association, said the District needs to finish writing the regulations that dockless bike companies — and scooter operators — would have to comply with.

“We certainly think that the issue needs to be studied, but we also think the city needs to do quite a bit more in order to get more people on bikes,” Gardner said.

But, in order to do that, Gardner said infrastructure and street design need to be addressed. That could be done, he said, “by investing in a major expansion of the network of protected lanes that offer safe and comfortable places to bike and scoot.”

The D.C. government has pledged to reduce road fatalities in its “Vision Zero” plan, Gardner said, but the city needs to employ barriers other than flex posts, those white plastic barriers that look like tubes sticking up from the roadway.

“People drive over flex posts,” Gardner said, noting that a number of them were added to an intersection where a cyclist was recently killed. “Ideally, what we need to see is not just flex posts, but also concrete or some sort of physical separation that people can’t drive over.”

Scooters have shown to be popular in D.C. but, similar to dockless bikes, they’ve gotten their share of criticism. Questions have arisen as to where scooters belong: on the sidewalks, on the street or in bike lanes.

Gardner said that’s where detailed regulations could help. Currently, scooters and bikes can be on sidewalks outside of the D.C. business district. “The reason that people ride on sidewalks is because it’s scary to ride on the streets,” Gardner said.

He added that if D.C. can create a network of protected bikeways, that’s when ridership could really take off.