‘What is the threat?’: Federal commission puts National Zoo security plans on hold

WASHINGTON — Plans to increase security at Smithsonian’s National Zoo are on hold for now.

The National Capital Planning Commission voted Thursday to defer action on proposed plans until it gets more information.

“There’s this big mystery about ‘what is the threat?'” Commissioner Mina Wright said. “We don’t have an explanation for what the threat is.”

The zoo’s security changes were to be considered in phases. The first phase plans to secure the perimeter with vehicle-resistant fencing and reduce the number of entry points from 13 to three.

The intention for the second phase is to construct security pavilions for visitor screening.

“Seeing that there will be screening facilities and gates coming, from a holistic perspective, why not look at how the whole system works together,” Commissioner Beth White said.

The vote on phase one plans were deferred until the Smithsonian gives the commission a security assessment for the zoo and conducts comprehensive community outreach.

“There seems to me to be a variety of legitimate concerns,” Wright said, noting that she has read all the community comments submitted to the commission on the subject.

Wright told Albert G. Horvath, Smithsonian chief operating officer and undersecretary for finance and administration, that the community disagrees with his assessment that reducing entry points and adding fencing would have little impact on visitor experience or on the zoo’s parklike setting.

Horvath said there’s no desire to change “the feel” of the National Zoo — it’s one of the gems of the city.

“I would urge you also to consider the challenge that our zoo police officers have,” Horvath said. “And, [consider] our desire to create a situation for them where they can be more effective and more successful in what they do.”

Commissioner Evan Cash wondered whether consolidating entry points is less about security and more about defining access as a means to perhaps start charging admission at some time in the future.

“It can be a slippery slope, I think, under the guise of security,” Cash said. “That could be an easy next step, because now we could just take your tickets and you can buy them at these, eventually four, entrances.”

The $1.5 million to pay for new fencing is already in the Smithsonian’s 2019 budget. Horvath said concept studies for potential screening pavilions estimate they might cost about $2.5 million.

The commission’s next meeting is Sept. 6. 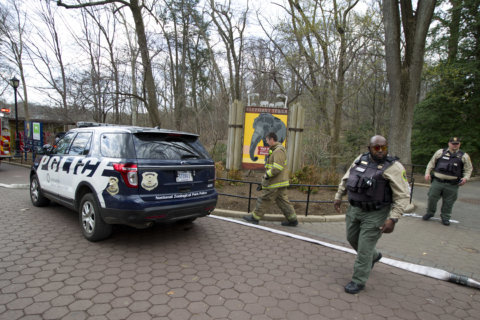