WASHINGTON — The amplified noise bill proposed by three D.C. Council members was withdrawn during a meeting Tuesday by the council’s chair.

The Amplified Noise Amendment Act was proposed in the hopes to clarify noise levels and lower fines for street performers, but the bill drew criticism from performers and residents, who launched the hashtag “#soundproofDC.”

Standing here with fellow DC Residents to stand against a ban on amplified music in DC. #SoundproofDC pic.twitter.com/vwL57AuSvR

Under the bill, violators would first receive a verbal warning from a D.C. police officer or other law enforcement officer. If they continued after receiving that warning, they could be punished by a fine up to $300, up to 10 days imprisonment or both.

At the meeting, D.C. Council Chair Phil Mendelson defended the legislation, saying there was a fundamental misunderstanding of the proposal.

He said the bill would not prohibit amplified noise but only limit the levels of amplification. Mendelson said if the music was so loud that it interfered with a normal conversation 100 feet away from its origin, only then would performers feel the repercussions.

“It’s simply a way to accommodate both the street performers and the people who are affected by excessively loud, disturbing noise,” said Councilwoman Mary Cheh on the Sunday before the meeting.

Though the legislation was withdrawn, the original bill is expected to return for council consideration in the fall.

WTOP’s Keara Dowd and Jenny Glick contributed to this report. 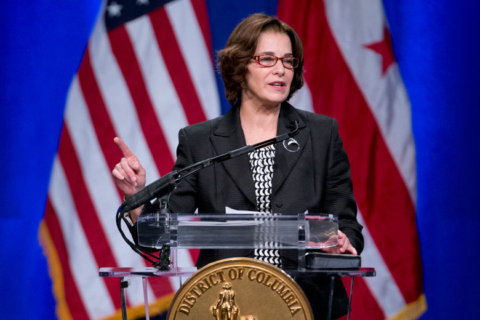