DC could shut down street near arena for Caps’ playoff games

It's a practice done in other cities with winning teams, apparently, so ticketless fans can cheer on the home team together. "I guess we're just not used to that here because we never got this far before," said a D.C. Council member.
Listen now to WTOP News WTOP.com | Alexa | Google Home | WTOP App | 103.5 FM

WASHINGTON — Capitals fans who can’t get tickets for the Eastern Conference Finals matchup might still be able to watch the game right outside Capital One Arena. 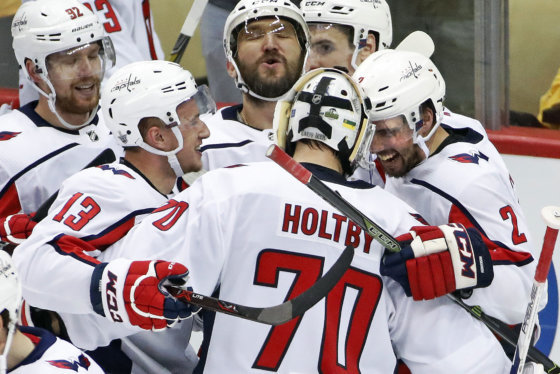 Capitals trump Penguins in OT to advance to conference finals

Evgeny Kuznetsov’s breakway goal 5:27 into overtime gave the Washington Capitals a 2-1 win over the Pittsburgh Penguins in Game 6 on Monday night, and a berth in the Eastern Conference finals for the first time in 20 years.

D.C. Council member Jack Evans said he’s looking into closing a portion of street so ticketless hockey fans can still watch the game together and cheer on the home team.

It’s a practice done in cities with winning teams, apparently. “I guess we’re just not used to that here, because we never got this far before,” Evans said.

Possibilities include closing Seventh Street Northwest between F and G streets Northwest. Making it all happen, he said, will require getting the logistical “pieces in place,” he said.

“Wouldn’t that be great if we had 10,000 people sitting … on the museum steps?” Evans said of the National Portrait Gallery near the Capital One Arena.

Evans added that it probably wouldn’t happen until mid-round, about the time when the Caps return to host the Tampa Bay Lightning.

Games 1 and 2 are set for Friday and Sunday, respectively, in Florida. The matchup returns to D.C. on Tuesday for Game 3 of the best-of-seven series.

And regarding that game Tuesday: It begins at 8 p.m. Evans, who chairs the Metro board, said late service hours are a possibility to accommodate fans.

“We’re certainly in discussions with the Capitals to see how we can make that happen,” he said.

“For us to get out of the second round — are you kidding me? This is unbelievable.”