Taking a cue from the survivors of the high school shooting in Florida that killed 17 people, teenagers from Northern Virginia, D.C. and Maryland gathered in front of the White House to push for tighter restrictions on access to guns.
Listen now to WTOP News WTOP.com | Alexa | Google Home | WTOP App | 103.5 FM

WASHINGTON — Taking a cue from the survivors of the high school shooting in Florida that killed 17 people, teenagers from Northern Virginia, D.C. and Maryland gathered in front of the White House to push for tighter restrictions on access to guns.

Whitney Bowen, a 16-year-old student from Northern Virginia, said the idea for the “lie-in” in front of the White House was organized over the weekend, and she and a group of her friends posted the information to Facebook. The result was a protest that featured a reading of the names of those killed in mass shootings and participants lying down in front of the White House, symbolizing those who died. 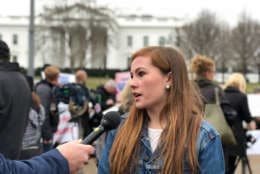 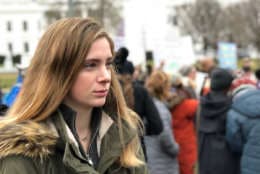 Gigi Aiken, who is 17 and attends school in the District, said: “Right now I don’t have the fear that one day maybe a shooter will come into my school, but other students are starting to feel that and that’s what needs to change right now.”

Initially, 17 students lay down on Pennsylvania Avenue in front of the White House, but then dozens more children and their parents joined in, holding signs saying “Am I Next?” And “Change Gun Laws or Change Congress.”

Some counter-demonstrators showed up, and were met with chants of “Shame! Shame!”

Virginia Rep. Don Beyer, a Democrat, was there to support the teenagers.

“This is the most optimistic I’ve been in a long time,” Beyer said, noting the participation of young people. “These kids across the political spectrum really give us hope.”

Beyer said young people have been able to influence attitudes on a range of issues, citing marriage equality as one example.

Arun Gupta, from Northern Virginia, brought his two teen sons to the protest. He recalled the Virginia Tech shootings in which 32 people died.

“Eleven years later, nothing has changed,” he said. Back then, he said he took part in protests on gun control.

His 15- and 16-year-old sons have grown up in an age when mass shootings at schools have become more common, he said.

“Now, we’re all trying to jump in and support their cause again,” he said.