WASHINGTON — Antwan Wilson, the chancellor of the D.C. public school system, resigned on Tuesday in the wake of his announcement last week that he violated system policy by circumventing the lottery process to get a school transfer for his child.

D.C. Mayor Muriel Bowser announced at a news conference that she had accepted Wilson’s resignation Tuesday afternoon, saying Wilson “would be unable to successfully lead the schools, having not been able to regain the community’s trust.”

Dr. Amanda Alexander, the chief of elementary schools, will be the interim chancellor, Bowser said.

Wilson said in a statement Friday that he “sought assistance” on how to transfer his child to Wilson High School “correctly,” but that “the process I followed did not align with DCPS policy.” Jennifer Niles, the deputy mayor for education, resigned that day as a result of the announcement; at least one D.C. Council member said Niles was the one who gave Wilson that assistance.

The policy was one Wilson himself put in place — one of his first moves upon taking over the school system last year.

Earlier Tuesday, Councilmember Robert White confirmed that Wilson had been placed on administrative leave and asked to resign.

Bowser on Tuesday called Wilson “an extraordinary educator” and “a human being that made a mistake.” She said that while Niles resigned immediately after Friday’s announcement, she gave Wilson “the opportunity to explain that mistake and seek to regain the trust he needed to lead.”

D.C. Council Chairman Phil Mendelson said in a statement, “I support today’s resignation of the D.C. Schools Chancellor.” He said the request for Wilson’s resignation came after a meeting among himself, Bowser and Education Committee Chairman David Grosso “in order to come to a consensus on the best way forward for our school system. The resignation of the chancellor is that way.”

Mendelson called the actions Wilson announced “indefensible,” and that he was “highly disappointed that our progress in public education has come to this point.” He added, “The challenge — our challenge — is to overcome this moment, and recent scandals over attendance and graduation.”

Asked whether he was pleased with the mayor’s decision, Grosso said, “Pleased would be too strong of a word. I’m OK with it … I think it would have been very hard for the chancellor to continue.”

He said about Wilson, “I was impressed with the work that he did,” adding that they had “a strong working relationship. … It’s gonna be hard to rebuild it.”

Grosso wasn’t one of the seven members of the D.C. Council who had called for Wilson’s resignation. On Tuesday he said, “I was trying to be thoughtful and deliberative about it. … I don’t do anything on a whim and I don’t do it quickly.”

He said he talked with colleagues and the community, and that “to be honest, the feedback I was getting” on the question “was more along the lines of 50-50 on this; it wasn’t a straight call for resignation.” He added that Wilson had been “very well received” at a community meeting at scandal-plagued Ballou High School last week.

On the job a year

Bowser chose Wilson for the chancellor’s job in November 2016; he started in February 2017. He was previously superintendent of the Oakland schools.

He signed a two-year contract when he began the job; asked about financial arrangements, Bowser said, “We will negotiate his exit.”

Alexander said on Tuesday that she was “pleased to serve” as interim superintendent, and that she wanted to “finish the year strong.” She also said she planned “to connect with members of our community … to rebuild” the trust that has been eroded. She said a series of community meetings will be scheduled, but haven’t been announced yet.

Asked whether the council would have more responsibilities in the process of choosing the next chancellor, Bowser said that they already had a consent role.

Grosso agreed, calling the process that led to Wilson’s hiring “robust.” He said Bowser had fulfilled all the expectations he had expressed to her in a letter he wrote her at the beginning of the last process. “You can’t … prevent somebody from doing what happened.”

Earlier Tuesday, the number of D.C. Council members calling for Wilson’s resignation grew to seven — a majority of the 13 members.

Many of those who called for his resignation praised the job Wilson had been doing while at the same time saying Wilson wouldn’t be able to regain that trust from parents.

Brianne Nadeau, D-Ward 1, in a statement Tuesday described Wilson as someone “who truly listens, who is responsive to parent concerns and has worked with me in partnership to move forward on long-standing issues” in the school system. She also praised his “openness and spirit of collaboration.”

But that just made Wilson’s actions more “deeply disappointing,” concluding that “too much damage has been done to the public trust,” citing “how stressful and challenging the school lottery can be, and how important school placement is for each child.”

Kenyan McDuffie, D-Ward 5, said in a statement Tuesday, “If prior to this controversy Antwan Wilson was the person to lead DCPS into the future, it is now clear that he no longer maintains the public confidence needed to do so.”

Councilmember Mary Cheh, D-Ward 3, said on Monday, however, that Wilson needed to resign “for reasons that go well beyond the school-placement issue,” citing recent revelations of improper grade-changing at many D.C. high schools. 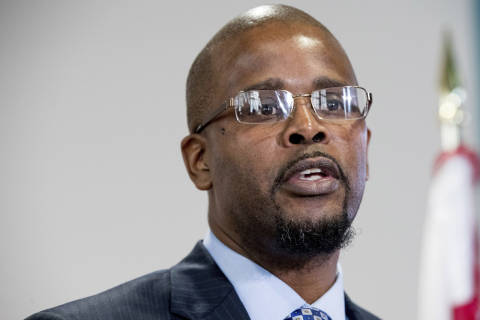