WASHINGTON — A legislative fight between D.C. Council members and Mayor Muriel Bowser went a step further Tuesday as the Council advanced a bill that would allow tax dollars to be used to help fund political campaigns.

Under the bill, which Bowser opposes, candidates could potentially tap into a pool of public money controlled by the District’s Office of Campaign Finance.

The option would be available for those running for mayor, city council, attorney general and the State Board of Education.

“The program incentivizes candidates to focus their time on connecting and engaging with a wide range of constituents, instead of targeting a small number of corporate contributions,” said Councilmember Charles Allen during a meeting on the bill last month.

However, Bowser has said she would refuse to fund the measure if it passes, arguing that it is a waste of tax dollars.

The program, which still needs one more Council vote for final approval, would likely cost at least $5 million each year.

“It will amplify the voice of small-dollar donors, and it will rein in the outside influence of wealthy and corporate contributions in District elections,” Allen said.

To qualify, candidates would be required to raise a certain amount of money through small donations from individuals.

After qualifying, candidates would be eligible to receive a lump-sum payment in public funding which would total $160,000 for mayoral candidates and $40,000 for those running for a seat on the council.

Candidates could then match small donations with public funding at a rate of 5 to 1, meaning a candidate could receive $250 in tax dollars for an individual donation of $50.

Those who participate would need to turn down contributions from corporations and political action committees.

There would be a limit to how much a candidate could receive in matching public funds.

According to Allen, the cap would be “calculated based on past expenditures for each office.” For mayor, it would be “110 percent of the average expenditures of the winning candidates for that office in the prior four election cycles.”

More than 25 jurisdictions in the country, including Montgomery County in Maryland, have similar public financing programs. 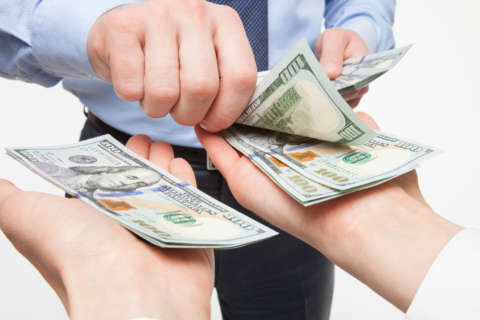 Under DC bill, tax dollars would be used to fund political campaigns