Volunteers bundled up and got to work on the National Mall Saturday morning with the goal of cleaning up around the Vietnam Veterans Memorial. See photos.
Listen now to WTOP News WTOP.com | Alexa | Google Home | WTOP App | 103.5 FM
(1/4) 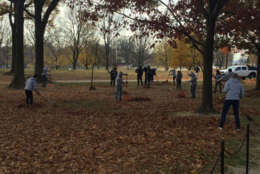 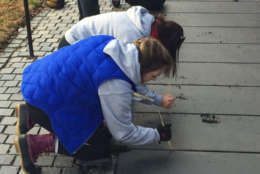 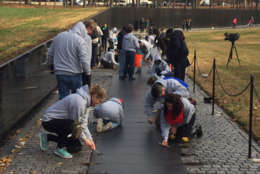 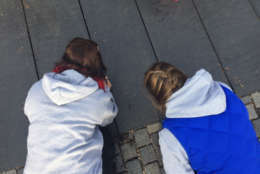 WASHINGTON — Dozens of volunteers bundled up and got to work on the National Mall Saturday morning with the goal of cleaning up around the Vietnam Veterans Memorial.

The work they did would be along the lines of the kind of grunt work found on a “honey-do” list at home. The memorial may not have looked bad but volunteers wanted to do their part to make it look even nicer.

The volunteers were part of the New Day USA Foundation, which helps spruce up the land around certain war memorials on a regular basis.

“It’s very powerful,” Lynch said when asked about the meaning of this particular memorial carries for him. Several of his friends and classmates from the United States Naval Academy now have their names etched into the wall.

“One of whom was another linebacker on the football team, Tommy Holden … going back for his second tour in Vietnam, his family had a farewell party for him. That night he took his sister aside and said ‘I know I’m not coming home, take care of mom.’ That’s the type of people we have on that wall. So it’s very meaningful to me.”

“It’s a way you remember their sacrifice and their spirit.”

After a sequence of speeches, the volunteers, in coordination with the National Park Service, went to work. Some of them, like Miles Thomas of Baltimore, started raking leaves near the wall.

“I love doing this,” Thomas said. “It’s always nice to give back, it’s one of our core values that we embody the most.”

Closer to the wall, some volunteers worked a special vacuum to dig out pebbles that had fallen between the cracks of the stone walkway. Others got on their hands and knees and used sticks to dig up dirt, leaves and other types of debris from the drainage system that runs down the middle of the walkway.

It’s in that section of the memorial that debris descends a few feet lower than the rest of the National Mall, and that drainage system helps disperse water before it causes any damaging flooding in the middle of the memorial.

Shannon O’Brien of Boonsboro, Maryland, drove down to help get some of that debris out, while other volunteers swept it all up.

“This wall does mean a lot for my family and for lots of families, obviously,” O”Brien said. “But especially mine. My grandfather was a Vietnam veteran … he knew a few people on this wall. Just helping clear the pathway and make it a better experience for anyone whose coming out to really see their ancestry and how they served their country, and even people they might have known, I think that’s a big deal.” 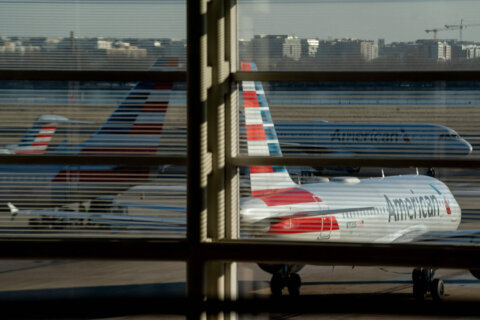