The bald eagle that was found soaking wet and unable to fly In Southeast D.C. this weekend may be Justice, the male half of the pair of bald eagles that established a nest on the grounds of the D.C. Police Academy.
Listen now to WTOP News WTOP.com | Alexa | Google Home | WTOP App | 103.5 FM

WASHINGTON — The bald eagle that was found soaking wet and unable to fly In Southeast D.C. this weekend may be Justice, the male half of the pair of  bald eagles that established a nest on the grounds of the D.C. Police Academy. That’s according to local wildlife officials who’ve been monitoring the big bird.

Dan Rauch, a wildlife biologist with the D.C. Department of Energy and the Environment, said it’s impossible to say for sure whether the eagle is Justice or the female, Liberty, but that it’s almost certainly one of those two eagles. That’s based in part on how close their nest is to the area where the eagle was found: less than a mile away from the grounds of the police academy.

Other than doing a side-by-side comparison — the females are larger than the males — Rauch said distinguishing the sex of a bald eagle is a challenge. There aren’t any distinctive markings, and it can put added stress on a wild animal to do the kind of close physical exam needed to be sure of the gender. As Rauch says “Imagine handling an angry, stressed bald eagle to determine the sex — do you want to do that?”

But the eagle is starting to show signs of recovery. 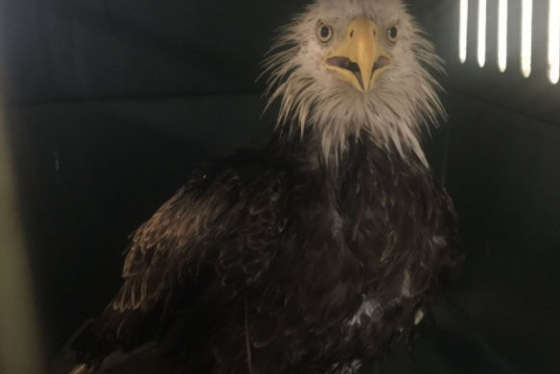 An injured bald eagle was rescued in Southeast D.C. Saturday, just in time for the Fourth of July.

Paula Goldberg, executive director of City Wildlife, said Monday that the bald eagle, which was brought in by Animal Care and Control Saturday night, looked like it was in tough shape. “It was soaking wet and very stressed. It was open-mouthed breathing and breathing very rapidly. It was a very unhappy bird.”

Goldberg said the eagle has been kept in a large enclosure in a quiet area of City Wildlife’s facility. “It actually ate [Sunday]” — a good sign, Goldberg said. “When birds are sick and down and out, they won’t eat. They are very similar to people: When you don’t feel good, you don’t really want to eat.”

Preliminary blood work shows no signs of lead poisoning, a real problem for many birds of prey who typically ingest lead from carcasses of deer, pheasants or other wildlife that may contain lead slug or bullet fragments.

The next step is to get the eagle to another facility where more tests — including a flight test — can be conducted. If and when the bird, whose gender hasn’t been determined, is given a clean bill of health, Goldberg said, it would be released near the area it was found.