Can you crack the case of DC’s missing liberty bell?

It weighs 2,000 pounds, looks like the real thing (minus the crack) and it has been missing for more than 35 years. Now the public is being asked to polish up their magnifying glasses and fuel up their mystery machines to help crack the case of D.C.’s missing liberty bell.
Listen now to WTOP News WTOP.com | Alexa | Google Home | WTOP App | 103.5 FM
(1/3) 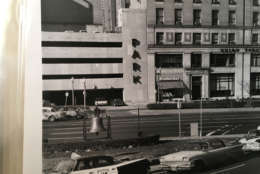 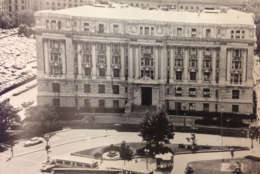 WASHINGTON — It weighs 2,000 pounds, looks like the real thing (minus the crack) and has been missing for more than 35 years.

Now, the public is being asked to polish up their magnifying glasses and fuel up their mystery machines to help crack the case of D.C.’s missing liberty bell.

“It will be a real challenge to track it down,” said Josh Gibson, director of communications for the D.C. Council. Gibson has made a name for himself solving historical mysteries at the Wilson Building.

Monday he released pictures he found of the commemorative bell during a news conference at the Wilson Building. He is appealing to the public in hopes of uncovering more images, memories or even information that could uncover its location.

The bell is one of three versions of the iconic symbol located in D.C. A replica that’s twice the size of the real Liberty Bell sits in front of Union Station. Another replica lies between the White House and the Treasury Building. The atrium inside the Wilson Building also boasts a colorful bell that Gibson described as the Thai Grievance Bell.

Last year, Gibson solved the mystery of a plaque found in a broom closet at the Wilson Building. The plaque without a title turned out to list the names of D.C. government employees who served during World War II.

Gibson’s next challenge is now locating the missing bell.

The story of the D.C. liberty bell begins in 1950, when the nation saw a good year for savings bonds. To celebrate, Gibson said the federal government had a foundry in France make replicas of the Liberty Bell — the original still resides in Philadelphia. One replica was given to each state and U.S. territory plus the Treasury Department.

Soon, a glistening, crack-free bell was gifted to the District and was placed outside the Wilson Building. It greeted visitors atop the steps of the government building before it was moved to a nearby, triangular park, according to Gibson. It remained in that park until at least April 1979. But by July 1981, the bell had disappeared.

During that time, the Pennsylvania Avenue Development Corporation was in charge of monuments and statues along Pennsylvania Avenue. The PADC was established by Congress and was made up of oversight committees, city government and other civic groups.

“It was like a bureaucracy made up of bureaucracies,” Gibson said.

In 1980, the PADC decided to improve Pennsylvania Avenue and the project required that several statues, small monuments and the liberty bell be moved.

Gibson said that over the years, the statues of D.C.’s first mayor, Alexander “Boss” Shepherd, eventually reappeared in front of the Wilson Building; the statue of Ben Franklin was placed in front of the Old Post Office Pavilion; and the Temperance Fountain moved back to the National Archives.

But D.C.’s version of the liberty bell did not re-emerge.

“It’s still, I would assume, somewhere where it got stashed,” Gibson said.

It could be in storage, sitting in a small park with little foot traffic, or in a backyard — the possibilities are endless, he said.

Gibson said he’d like to speak with anyone who knows anything about a company called G & C Construction, a contractor based out of Merrifield, Virginia, which held the PADC subcontract to rebuild the sidewalks outside the Wilson Building. The company, or anyone once affiliated with the business, might know something about the temporary relocation of the bell.

He’s also hoping to collect more photos of the bell. He knows of roughly a half dozen images that exist of the bell and more images could help fill out the historical record.

Additionally, Gibson wants to hear from anyone who remembers the bell. He said the bell was a common landmark and a frequent meeting spot downtown from the 1950s to the 1970s.

He said extensive communication with staff of the PADC and District staff who would have been involved in relocating the bell have yielded no clues about its whereabouts.